We’re all a little crazy.

Some of us, of course, are crazier than others. In video games, the craziest people generally fall into three categories: villains, mad scientists or both.

I find mad scientists particularly interesting. They abandon morality (and occasionally their own humanity) in their frenzied pursuit of knowledge or power. Like Adam and Eve snatching the forbidden fruit of Eden, these lunatics rebel against God and nature in the name of progress.

Mad scientists may not be good people, but they sure are good characters!

In listing ten remarkable mad scientists in video games, my usual rules apply: I won’t include characters from games I haven’t played (with one notable exception) and will include only one character per game series.

Let’s get crazy, ladies and gentlemen, as TMTF presents…

Be ye warned, here there be minor spoilers.

Andross was once a brilliant scientist, but experiments damaged his sanity and ruined his body. Although he doesn’t have much personality, Andross establishes himself as a notable villain by killing the father of the games’ protagonist and declaring himself emperor of the solar system. I also want to point out that Andross is apparently comfortable with sacrificing his body and becoming a disembodied head. That’s pretty crazy.

No, not that Doctor. This Doctor is actually a medical practitioner, albeit one with a terrifying lust for power and a violent disregard for the Hippocratic Oath. The Doctor is merciless, selfish and cruel. He also gets bonus points for using himself as a test subject and becoming a hideous mutant. Besides, I love that he carries around a pen. More villains need pens sticking out of their pockets. 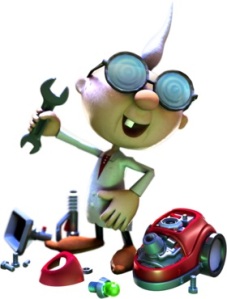 Egad! This nutty little gentleman has the distinction of being pretty much the only good guy on this list. Professor Elvin Gadd is an inventor and paranormal researcher whose crowning achievement is a vacuum cleaner that sucks up ghosts. He’s cheerful, egotistical and blithely inconsiderate. He also sounds exactly like an Ewok from the Star Wars films. Coincidence? Yeah, probably. All the same, this pint-sized prof definitely has a few screws loose.

Fennel is the head of a military research and development team. He’s also just a head. (There might be a body inside that slug-like machine, but I’m not sure.) Working for the warlike nation of Alistel, Fennel develops thaumatechnology: an arcane sort of machinery consisting mostly of weapons and other stuff that can kill you. He’s in love with his work, which takes place in a dim, ironclad labyrinth of underground chambers. Seriously, Fennel is kind of creepy. 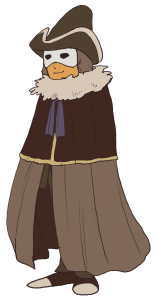 I haven’t actually played any of the games in which Jean Descole appears, but my brother insisted I put him on the list. (I’ll finish the Professor Layton series sooner or later.) Descole is cold, calm and cunning… except when he’s angry. Then he’s kind of scary. This archaeologist, master mechanic and self-proclaimed scientist manipulates others, shows no remorse and stops at nothing to achieve his goals. Don’t be fooled by that detached smile. Descole is not a sane man. 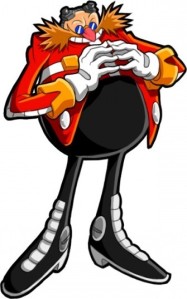 As his name and title suggest, Doctor Eggman is a doctor shaped like an egg. Despite being extremely intelligent, he is not particularly bright; his schemes for world domination are invariably foiled by either a hedgehog or his own incompetence. Eggman is short-tempered, egotistical and prone to bouts of maniacal laughter: defining characteristics of a mad scientist. Besides, dat stache.

This poor fool, who is never given a proper name, is so devoted to his study of supernatural phenomena that he moves to a desolate, haunted valley to study ghouls and ghosts… and takes his young daughter Pamela with him. When his research causes him to deteriorate into a monster, she traps him in the basement and bars the front door against the ghouls circling the house. Terrifying? Heck yes. Pamela and her father are eventually rescued and his humanity restored. Regardless, any scientist crazy enough to drag his daughter to an isolated wasteland to study monsters is, well, really crazy. 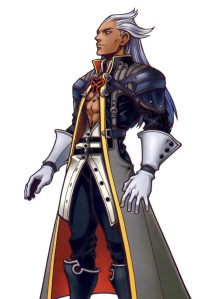 Without delving too deep into the convoluted lore of the Kingdom Hearts universe, I can confidently declare this man a lunatic. His research into the darkness of the human heart leads to the creation of Heartless, shadowy monsters that swarm across the universe to devour worlds. Ansem himself becomes a Heartless. Then—in the time-honored tradition of mad scientists—he tries to conquer everything. This tanned, stylish scientist gets extra points for inverting the stereotype of the pallid researcher in a lab coat.

This psychopathic artificial intelligence builds death traps and forces test subjects to solve them. Why? For science, of course! So what if her research methods kill a few people now and then? GLaDOS believes her experiments are worth the cost: “The science gets done and you make a neat gun for the people who are still alive!” I love how this AI becomes unhinged throughout the games, eventually stooping to ranting and petty insults. For complexity of character and degree of insanity, GLaDOS is wonderful.

Cidolfus Demen Bunansa is one of the best video game characters I’ve ever seen: supercilious, brilliant, arrogant, foppish and seemingly insane. He treats tyrants with casual disrespect and talks aloud to an imaginary friend named Venat. I would call Cid a delusional lunatic, except for one minor detail—he’s actually sane. Cid is a rational man obsessed with defying the gods and putting “the reigns of history back in the hands of man,” abetted by the mysterious, invisible Venat. Of course, on his noble quest to liberate humankind, Cid doesn’t mind shedding a little innocent blood: this man ordered the obliteration of an entire city with the magical equivalent of an atomic bomb as a scientific experiment. Cid is fabulous, fascinating, evil, despicable, astonishing and awesome.

O people of the Internet, what video game mad scientists would you add to this list? Let us know in the comments!