We here at TMTF are experts on manliness. Some of us have the undeniable advantage of actually being men, giving us considerable insight into the manly virtues of loyalty, courage, honesty, bravery, integrity, humility and resourcefulness.

I personally possess a fascination for bladed weapons, an appreciation for beards and a liking for cartoons about magical rainbow ponies—all manly attributes.

Today’s top ten list features some of the manliest men in literature. A few rules apply to this list. Characters from books I’ve not read are not allowed on the list, and only one character is allowed per author. For the purposes of this list, manliness is defined as characterized by virtues generally associated with men.

By this definition, literary characters such as Odysseus and James Bond are not manly. They are intelligent, strong and brave, but their moral flaws (arrogance, dishonesty, lustfulness and disregard for the value of human life, to name but a few) disqualify them for this list.

Without further introduction, TMTF is excited to present…

The TMTF List of Top Ten Manly Men in Literature!

10. Sydney Carton (A Tale of Two Cities by Charles Dickens)

Sydney Carton is a hopeless mess of a man who wallows endlessly in self-pity. Although an interesting character, he wouldn’t even come close to making this list if it were not for his incredibly manly, stoic, selfless sacrifice in the final chapters of the novel. Heroism often seems pretentious, but true heroes quietly accept the burden of their fate. Sydney atones for a lifetime of unmanly weakness with one powerful act of heroism.

That’s a lot of neck.

The Artemis Fowl books are not sophisticated literature. In fact, they’re on roughly the same literary plane as the Twilight novels. I must confess to liking the Artemis Fowl books anyway. What they lack in substance and style, they provide in charm, whimsy and delightful absurdity. Domovoi Butler is the, er, butler of Artemis Fowl, an Irish criminal mastermind who also happens to be a twelve-year-old boy. Butler is not only a manservant, but also a bodyguard and a very dangerous man. Apart from his fierce and selfless loyalty to Artemis, he consistently manages to save the life of every person in the room every time there’s a crisis—which, in the Artemis Fowl books, is pretty much every chapter.

That is one manly ‘stache.

In spite of his strength, girth and massive beard, I don’t consider Rebeus Hagrid the manliest man in the Harry Potter books. (He’s not even a man, technically speaking.) No, that honor goes to Remus Lupin. (He’s also not exactly a man, but I’ll bend the rule this time.) Lupin is an eccentric, disheveled professor who turns out to possess remarkable kindness, humility, courage and common sense. Lupin also possesses a dark secret, a tragic burden which never seems to prevent him from being friendly and cheerful.

I couldn’t find an image of Emerson, so have a picture of Sean Connery being a gaucho.

Known to Europeans as a noted Egyptologist and to Egyptians as “the Father of Curses,” Radcliffe Emerson is notorious for losing his temper, swearing constantly and making fantastic archeological discoveries. Emerson may be gruff, but he loves his family and treats Egyptians with deep respect—unlike most of his nineteenth-century European colleagues, whose prejudice toward “the locals” frustrates him deeply. Beyond Emerson’s ostentatious masculinity—he’s a handsome, muscular man who dislikes wearing more clothes than absolutely necessary—he demonstrates many virtues of true manliness.

6. Gabriel Syme (The Man Who Was Thursday by G.K. Chesterton)

That is a fabulous hat.

The Man Who Was Thursday begins with a poet stumbling upon a secret society of anarchists, and promptly convincing them to elect him into their council of supreme leaders. The poet, who also happens to be a police detective, embarks on a mad journey to protect innocent people from the nihilistic terrorist known only as Sunday. In the face of danger, despair and absurdity, Syme never loses his resolve to do the right thing. His calm bravery in the face of extreme danger is incredible, and his response to tragedy is to maintain his hope and sense of humor. As a bonus, Syme is delightfully witty. 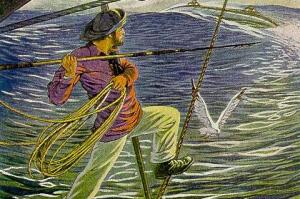 That seagull is toast.

As I’ve mentioned before, 20,000 Leagues Under the Sea has basically four characters, three of whom are obsessed to various degrees with science. The fourth, Ned Land, is a refreshing exception. A sensible, short-tempered harpooner, Land keeps his companions grounded (forgive the pun) every time their resolve falters. Despite disliking his host, Captain Nemo, Land doesn’t hesitate to save his life. Add bravery and a fierce love of life, and Ned Land turns out to be quite a manly fellow.

Adam Bede being even more wistful than Sydney Carton.

Stoicism is a manly virtue—not the absurd idea that men should go out of their way to suffer, nor the equally ridiculous notion that men must always hide their feelings, but the decision not to embitter the lives of others by complaining about troubles that can’t be avoided. Adam Bede has it rough. His life seems to be one tragedy after another. He perseveres, never complaining, always working, doing his best to provide for his loved ones and calmly accepting every blow dealt him.

Jean Valjean is more awesome than Batman, and they’re both awesome for exactly the same reasons: courage, stoicism, resourcefulness, compassion and an undying obsession with atoning for a mistake. What makes both characters so compelling is that they pay for their sins many times over and yet can’t overcome their guilt. They consider themselves monsters when they’ve become saints. Jean Valjean is humble to the point of self-effacement, unable to see what is plain to almost everyone else in the book: he is a great man, not to mention a manly one.

Aragorn has a troubled past, but he’s too busy defending Middle Earth from the looming threat of Sauron to waste time brooding over it. (Pay attention, Cloud Strife.) Aragorn is almost messianic in his heroism: a brave warrior, gentle healer and strong leader. He does not succumb to the temptations of the Ring, a powerful but evil relic, but humbly does his best to ensure its destruction. Ironically, the greatest hero of The Lord of the Rings isn’t Aragorn. An ordinary little person named Frodo destroys the Ring. Aragorn is quick to praise Frodo’s heroism over his own, and that is part of what makes Aragorn one of the manliest men on this list.

1. Atticus Finch (To Kill a Mockingbird by Harper Lee) 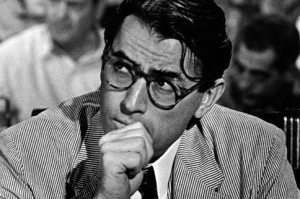 Ladies and gentlemen, men don’t come manlier than this.

I can think of no manlier man in all literature than Atticus Finch, the soft-spoken lawyer from To Kill a Mockingbird. Where do I even begin? Atticus can fire a gun with incredible accuracy, a skill of which his children are unaware because he dislikes violence and refrains from showing off. Atticus does his best to respect and understand every human being, and risks his safety to protect a prisoner from a mob. Most significantly, he willingly throws away his reputation as a lawyer to defend an innocent man. Blinded by racial prejudice, most white people assume the defendant, a black man, to be guilty. Knowing the trial will almost certainly end in a guilty verdict for the defendant, Atticus defends him anyway. Through all this, Atticus doesn’t complain once. He bears every burden patiently, doing the right thing and never losing hope—a true paragon of manliness.

O people of the Internet, what manly literary characters would you add to this list? Let us know in the comments!