Having previously posted a top ten list of video game villains, I felt obligated to put together a list for video game heroes, thus restoring equilibrium.

According to the standards of this list, a video game character must be playable in order to qualify as a hero.

Without further preamble, TMTF is excited to present…

The first thing to be said about Mario is that he has a fabulous ’stache. Equally impressive are his inexhaustible heroism and wide range of talents. When he’s not busy racing karts, competing in athletic events or curing viruses, Mario can usually be found trying to rescue his beloved Princess Peach, whose fate is to be kidnapped pretty much every time she steps outside. Apart from his mustache, chivalry and mad skills, Mario deserves a place on this list because…well…he’s Mario.

Unlike many women in video games, Samus Aran is no damsel in distress. Ms. Aran, a skilled bounty hunter, is quite comfortable fighting hostile extraterrestrials and exploring the uncharted depths of alien planets. Samus Aran’s high-tech armor is another good reason to give her a place on this list. Her suit is packed with all sorts of nifty weapons, tools and gadgets. It’s also modest and sensible—unlike many of the outfits women in video games are forced to wear.

Introduced as an aloof soldier, Cloud is revealed to be a man with a tragic past, struggling to forgive himself and atone for his mistakes. He’s also kind of a jerk, which is why I debated putting him on this list. Cloud won me over in the end: partly because he’s a compelling character, and mostly because he’s ridiculously cool. Although his redemption is a major theme of Final Fantasy VII, most players remember Cloud for his impossibly large sword. 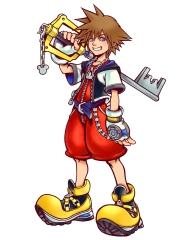 The protagonists in many RPGs are bitter, taciturn outcasts. (Ahem, Cloud Strife.) Sora is a refreshing exception to the rule: cheerful, friendly, fiercely loyal to his friends and always ready to help. Chosen by destiny to wield a weapon called the Keyblade, Sora is thrown into a universe in which all worlds are under attack by dark, mysterious creatures known as the Heartless. Sora never loses hope, no matter how desperate the situation, and he’s a genuinely nice guy. 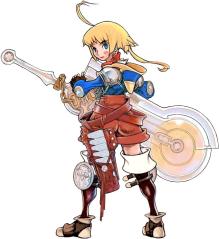 Yes, Marche Radiuju is an obscure character. Yes, his outfit is absurd. No, I don’t know how to pronounce his last name. Setting aside these concerns, Marche is quite a hero. When he and his friends become trapped in a fantasy world, he takes it upon himself to open a way for them to go home. Marche grows from a timid boy into a fearless leader, exploring new places, conquering vicious foes and even confronting his friends in order to do what he believes is right. He might not be as famous as some of the other heroes on this list, but Marche Radiuju is no less heroic.

The self-proclaiming leading man of Final Fantasy XII, Balthier is a sky pirate with a fabulous fashion sense. He was a powerful politician years ago, but he’s cleaned up his act (as he would put it) and become an honest brigand. Balthier has a strong sense of justice and loyalty, which he’s careful to hide behind an indifferent manner, a sharp wit and a truly staggering ego. In a story full of bitterness and betrayal, Balthier shines like the star he claims to be. 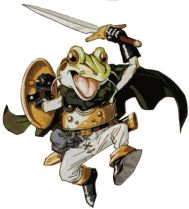 Although he appears to be a monstrous amphibian, Frog was once a brave lad named Glenn. A sorcerer called Magus murdered Glenn’s mentor and cursed the unlucky lad with a frog’s shape, ruining his ambitions of becoming a knight. Glenn abandoned his name and took up the lonely life of a vigilante. As the kingdom comes under attack, he joins the battle to defend it from Magus and his minions. Frog’s bravery, chivalry, unique appearance, intriguing characterization and epic musical theme earn him a place on this list.

Aerith is a paradox. She’s angelic and ethereal, yet down-to-earth and friendly. In the slums of Midgar—a dark, dirty place full of trash, monsters and ruined buildings—Aerith keeps a garden and sells flowers to make a living. The heroes of Final Fantasy VII are mostly embittered, tough and cynical. Aerith is cheerful, hopeful and compassionate. She has a beautiful musical theme, too. Then, halfway through the game, Aerith dies. Even though her dying actions help save the world, her companions (not to mention gamers everywhere) are left with a profound sense of loss.

Objection! Lawyers are not nearly so interesting as warriors, knights and bounty hunters. A mere lawyer does not deserve so high a place on this list of video game heroes… or does he? In the case of this particular lawyer, I overrule all objections and present the court with the following statement: Phoenix Wright is awesome. A rookie defense attorney, Phoenix defends his clients with perseverance, sarcasm, luck, spiky hair and an unshakable belief that everyone deserves a fair trial.

Link lacks any intricate characterization or complicated backstory. He’s a silent protagonist, without so much as a word of dialogue. Why have I put him first on this list? Link isn’t merely a character—he’s an archetype. He is the Everyman, the unexpected hero who is snatched from a peaceful life, thrown into an adventure and pitted against a ruthless enemy. Link is a simple character, but his simplicity serves him well. Right from the beginning, the player gets it. No elaborate explanations are needed. Link is an ordinary guy who overcomes evil and becomes a hero. It’s an old story, and one that strikes a universal chord to this day.

O people of the Internet, what great video game heroes would you add to this list? Let us know in the comments!