Long ago, when Victor Hugo was writing masterpieces like Les Misérables, another French author was writing novels about submarines, prehistoric creatures and hot-air balloons: Jules Verne, called the Father of Science Fiction.

20,000 Leagues Under the Sea is widely considered to be Verne’s greatest work. 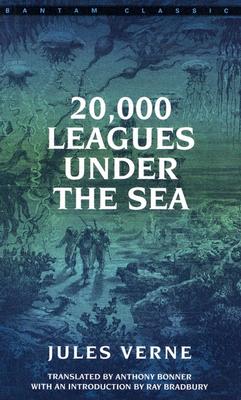 20,000 Leagues Under the Sea is a superb novel, blending adventure, fascinating themes and the intriguing characterization of the man who calls himself Nemo—Latin for Nobody.

The novel begins in the year 1866 with the appearance of an enormous seagoing creature. Larger than any whale, it glows with a strange light and eventually tears a hole in the hull of a ship. Professor Aronnax, the narrator of the novel, sets out on a ship with his faithful valet Counseil and a crew devoted to finding and destroying the menace of the sea. When Aronnax, Counseil and a harpooner named Ned Land end up stranded on the back of the creature, they discover it’s actually a submarine. Its captain, the enigmatic Captain Nemo, welcomes them aboard, and so begins an incredible journey under the sea.

20,000 Leagues Under the Sea is a gripping read for at least three reasons.

First, Verne paints a fantastic picture of the underwater world, a world teeming with wondrous creatures and marvelous landscapes—a world as strange as another planet, yet just beneath the surface of the ocean.

Second, the Nautilus, Nemo’s submarine, is fascinating. The reader is privileged along with Aronnax and his companions to discover the secrets of the submarine little by little, with Nemo patiently explaining each of its major components. How could such a machine be built in secret? How did Nemo assemble a crew, and who are his mysterious crewmembers? Why did Nemo build the Nautilus in the first place?

This brings us to the third element of suspense in the novel: Who in blazes is Captain Nemo?

Nemo’s characterization is amazing. The polite, brilliant, sardonic engineer to whom the reader is introduced early in the book is gradually revealed to be—well, I won’t say anymore here. As his motivations become clearer, he himself changes before the reader’s eyes. More than the wonders of the sea and the submarine, Nemo kept me interested in the novel.

Nemo, Aronnax, Counseil and Ned Land are pretty much the only people in the novel. One or two other characters are introduced in the early chapters before Aronnax and his companions board the Nautilus, but they’re forgettable. Nemo’s crew is faceless and voiceless; the only member who makes any lasting impression is Nemo’s second-in-command, a short, incomprehensible man who makes few appearances.

Aronnax is mildly interesting. Ned Land is more engaging, with a down-to-earth personality (as his surname implies) and a quick temper; he’s an excellent foil to the bookish Aronnax and idealistic Nemo. Counseil is disappointing: an impassive, unchanging, self-effacing manservant whose entire personality seems to consist of a compulsive tendency to classify biological specimens.

That brings us to my other objection to the novel: too many lists! Admittedly, part of the science fiction genre is to list facts and technical details; as Stephen Baxter observes in an introduction to my edition of the novel, “This veneer of plausible detail [is] a technique well-known in fantastic fiction.” However, Verne’s novel takes it to an extreme.

The first time I encountered one of Aronnax’s exhaustive lists of marine fauna, I found it interesting and even applauded Verne’s use of real-life detail to enhance his work. Halfway through the novel—about half a dozen lists later—I was becoming jaded. I didn’t want to read about every single species of fish in the Mediterranean—I wanted to read about Captain Nemo and the Nautilus!

Although it would have benefited from a larger cast of characters (and fewer lists), 20,000 Leagues Under the Sea is an excellent book and a must-read for aficionados of science fiction, steampunk stories or adventure novels.