Thence we came forth to see again the stars.

Dante’s Inferno is not a cheerful poem. It follows the poet Dante and his guide Virgil through hell, upon whose gate are inscribed these words: Abandon all hope, ye who enter here. This slogan could just as easily be printed on the poem’s front cover. Inferno isn’t a fun read, unless you happen to enjoy long conversations (all written in archaic language and poetic meter) with the tormented souls of damned sinners.

I once wrote about my favorite opening lines in literature, and more recently considered some of my favorite last lines. For example, A Tale of Two Cities ends on a poignant note: “It is a far, far better thing that I do, than I have ever done; it is a far, far better rest that I go to than I have ever known.” My all-time favorite last line concludes The Lord of the Rings: “‘Well, I’m back,’ he said.”

The final line of the Inferno is right up there with my favorites. For a poem whose most enduring words are “Abandon hope,” it ends hopefully. Dante and Virgil leave hell.

I can imagine it so clearly: disheveled travelers, exhausted from climbing in the endless dark, chilled by the ice of hell’s last circle, disturbed by the horrors of the underworld, glancing upward and seeing a sky alight with stars. I can see them stumbling out of the cave into the fresh air, blinking in the soft light from heaven. I can hear cicadas buzzing and feel a breeze stirring the grass. Hell is behind them. The nightmare is ended. After all the circles of hell, they know they’ve reached safety, for they see again the stars. 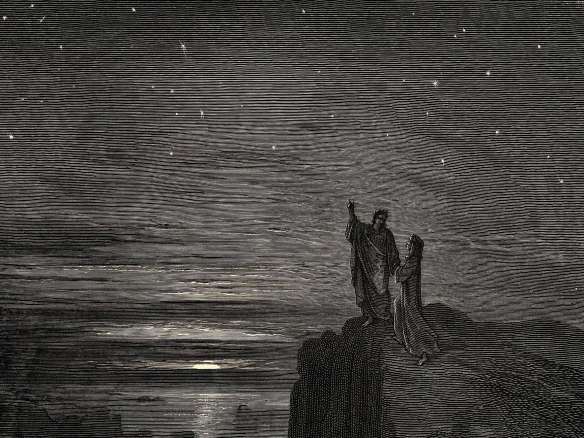 I’m a bit sentimental, but that’s one of my favorite images in all of literature. After literally going through hell, our heroes are safe. They are no longer trapped beneath stone ceilings. Above them, the heavens declare the glory of God. It’s a touching picture, and an uplifting end to a really bleak poem.

In one of the Chronicles of Narnia by C.S. Lewis, there’s a similar scene in which the protagonists escape an underworld to find themselves beneath a starry sky. J.R.R. Tolkien’s books also feature characters ending underground journeys by stumbling out into the open, such as Bilbo getting out of the Misty Mountains in The Hobbit and the Fellowship fleeing Moria in The Fellowship of the Ring. Escaping the underworld to find oneself beneath the sky has become a literary motif, and I dig it.

To conclude, here’s a bit of trivia: All three parts of the Divine Comedy end with the word stars. Neat, huh?

2 thoughts on “Abandon Hope, but Save a Little”