A long time ago, I declared the death of a dream. My attempts to tell the tale of Lance Eliot, a sarcastic and reluctant hero, had finally failed. I pronounced Lance Eliot dead… well, mostly dead.

I announce today that Lance Eliot is alive… well, somewhat alive. (I thought about titling this blog post Lance Eliot Is Alive, but that seemed much too optimistic, so we’ll have to settle for Lance Eliot Is Not Dead.)

After Typewriter Monkey Task Force concludes later this year, I will rewrite the first part of Lance’s story, The Trials of Lance Eliot, before moving on to its two sequels.

At any rate, that’s the plan. God only knows how many years it will take me to write the Lance Eliot saga, or whether I shall even finish it. I don’t know if I can, but I suppose I’ll try. 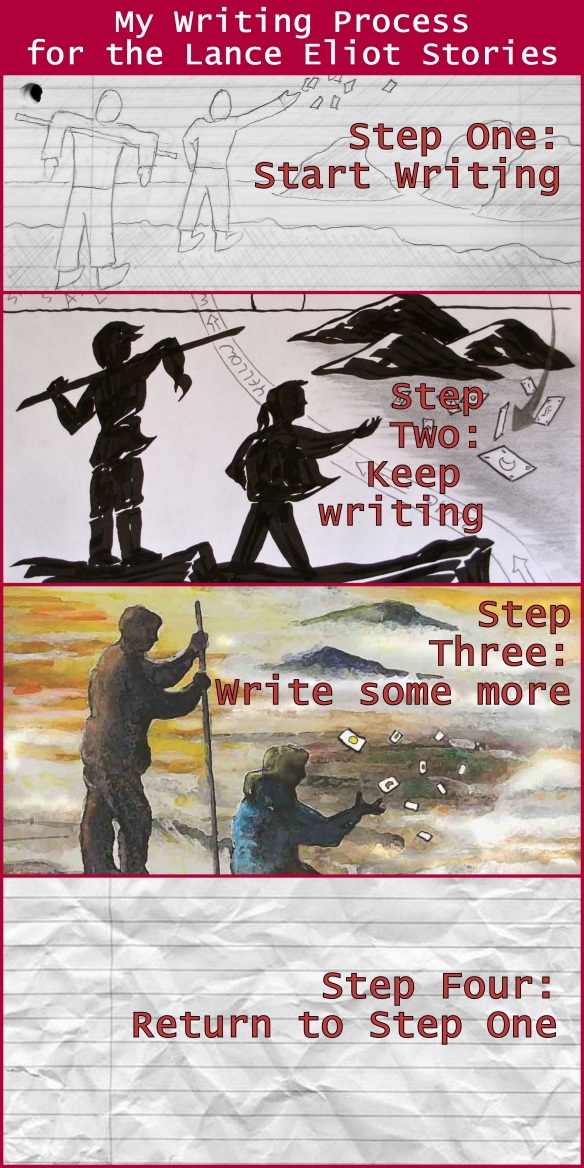 At this point there are three questions I should probably answer. Why am I rewriting The Trials of Lance Eliot instead of working directly on its sequels? Why am I revisiting Lance Eliot’s story instead of starting something totally new? And who the heck is Lance Eliot anyway?

Let’s start with that last one.

Who the heck is Lance Eliot?

From pretty much the moment I could read, I wanted to write a book. Years later, in middle school, I steeped my impressionable imagination in the fantasy novels of J.R.R. Tolkien, C.S. Lewis, and Stephen R. Lawhead; I also played a lot of fantasy games, such as the outstanding Legend of Zelda series. It was then, during my awkward transition from boy to slightly-taller-and-less-chubby-boy, that my vague dream of writing a book crystallized into a clear ambition of writing a fantasy novel.

It wasn’t until my sophomore year of high school that I stumbled upon a decent idea for a story. People in fantasies and fairy tales are often summoned from one place to another by magic. What if a magician summoned the wrong person by mistake? What she tried to summon, say, Lancelot from the Arthurian legends, but got some unsuspecting loser instead?

Over the next six years, the idea became a short story, and then a completed novella, and then one or two incomplete manuscripts, and then finally a published novel—and then it failed spectacularly, failing even to recoup the expenses of publication. I struggled for a year or so to make progress on its sequels, and finally gave up.

This brings us to the next question.

Why am I revisiting Lance Eliot’s story?

I no longer dream of publishing novels. Even if I finish all three parts of the Lance Eliot saga, which is by no means guaranteed, I may not bother publishing them. If I do take another stab at publication, I will probably self-publish instead of working with a literary agent or trying to court a major publishing house.

My reason for revisiting Lance Eliot’s story is a simple one: it’s a story I want to tell. In the vast scheme of things, it isn’t remotely special. It won’t be particularly deep or clever or original. I have no delusions of grandeur this time around. The Lance Eliot saga won’t be a masterpiece. It will be nothing more than a story I want to tell—a story I feel compelled to tell—a story I’ve struggled for more than a decade to tell.

I’ve already told part of it, but not very well. This leads to the final question.

Why am I rewriting The Trials of Lance Eliot instead of moving on to its sequels?

A few people have said ridiculously nice things about my novel; in response, I’m touched, flattered, and grateful. When I look at it, however, I see an embarrassing number of clichés, oversimplifications, cheap coincidences, and lackluster characterizations.

I believe I can do better. There are so many things I want to change about the story, including some I haven’t mentioned. Instead of writing reluctant sequels to a failed novel, I want to start over with more experience and creative freedom, and less emotional and literary baggage.

Am I excited to revisit the Lance Eliot saga? Nah, not really. What I feel is a mixture of resignation, determination, nervousness, and cautious optimism.

After four or five manuscripts, one failed novel, and more than a decade of hard work, I am now almost ready to begin working on the Lance Eliot saga. Oh, boy.