All right, guys. We all knew this was coming. It was only a matter of time.

I like villains—from a safe distance, of course. Bad guys are often so much more interesting than good ones. Whether misguided, damaged, or simply evil, a striking or well-developed villain is often the best part of a story. Walt Disney Animation Studios understands this. In its seventy-something years of filmmaking, it has created an entire pantheon of memorable bad guys.

Prepare yourself for the best of the baddies, ladies and gentlemen, as TMTF presents…

Be ye warned: Here there be minor spoilers.

10. Cruella de Vil (One Hundred and One Dalmations)

Not every villain needs to be an all-powerful menace. Cruella de Vil is merely a bad person: shallow, selfish, cruel, unbalanced, and a little sociopathic. I would call her a crazy cat lady, but she’s more of a dog person—but only if “dog person” means “person who wants to kill puppies and turn their skins into coats.” Her visual design is incredible, from the bulky furs dangling from her skeletal body to the sneer on her blood-red lips. Cruella de Vil is a maniac, and a refreshingly low-key change from the large-scale evil of other Disney villains.

Maleficent isn’t a complex villain, or even a particularly interesting one, but she gets bonus points for making an impression. She may be the most recognizable baddie in the Disney pantheon. Maleficent perfects the gaunt-and-sinister-old-lady character type. By comparison, the queen from Snow White and the Seven Dwarfs and the stepmother from Cinderella seem like mere prototypes. Maleficent also turns into a dragon, which is pretty rad. 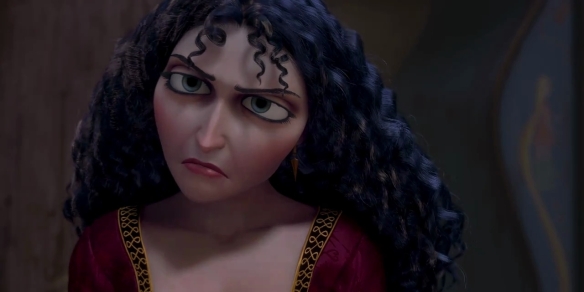 I’m going to be lazy and let another blogger explain this one: “What makes Mother Gothel terrifying is the fact that Rapunzel loved her. That makes Mother Gothel more than a villain in the traditional hey-I’m-going-to-kill-you way. It makes her a liar, deceiver, and traitor, violating one of the deepest bonds we can think of (mother-daughter).” (As long as I’m stealing ideas from Amy Green, you should go read her old two-part post on Disney villains.) Mother Gothel isn’t as powerful as other villains on this list, but she’s far more relatable—and that scares me more. 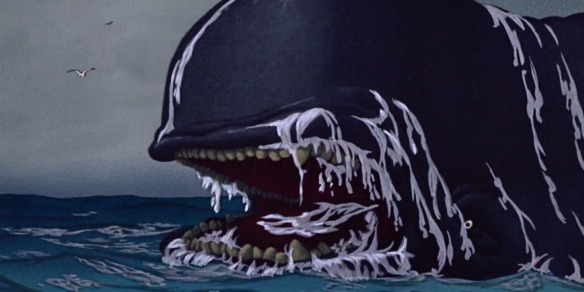 Monstro is not a well-developed character—or any kind of character, for that matter. Monstro is a whale. He has no dialogue, and his only apparent motivation is rage. Like Sauron in The Lord of the Rings or Cthulhu in the works of H.P. Lovecraft, Monstro is not so much a character as a force of evil. Monstro is a monster, true to his name, in the truest sense of the word: inscrutable, elemental, destructive, powerful, incomprehensible, angry, and terrifying.

Shere Khan is an implacable predator. He isn’t exactly evil, but lives according to his nature, and his nature is to kill. Here is another example of superb visual design creating a memorable character: his massive jaw and tiny yellow eyes give him a predatory look, and his smooth, cat-like movements convey power and confidence. The unsettling way Shere Khan swings from politeness to savagery reminds me of Hannibal Lector from The Silence of the Lambs. Shere Khan isn’t out to conquer the world. He just wants to kill, and he’s creepily nice about it. 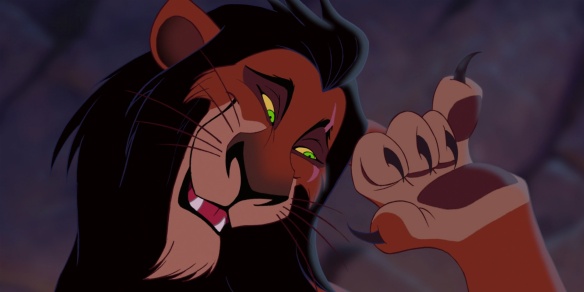 Scar is delightful and charming, insofar as a treacherous tyrant can be either of those things. As a king’s younger brother, he resents his young nephew for taking away his claim to the throne. (It’s all very Shakespearean, which is appropriate since The Lion King is based loosely on Shakespeare’s Hamlet. Scar reminds me more of Richard III, though.) I can think of a lot of words to describe Scar: sarcastic, scheming, ruthless, resentful, and vicious, among others. He has a lot in common with other Disney villains, but his underhanded charm sets him apart. 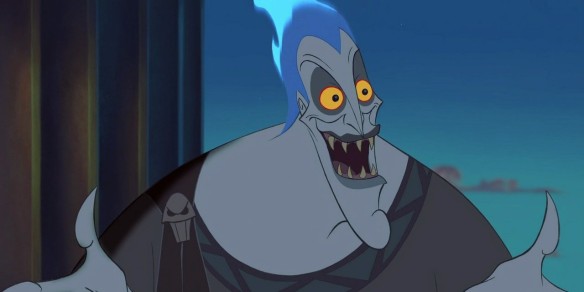 This smooth-talking scoundrel gives the impression of a shady used car salesman. His friendly manner can’t hide his short temper and ill intent. Did I mention that Hades is the god of the dead? He’s the god of the dead. His character in the film is never quite as funny as I remember, yet I absolutely adore the combination of a sleazy personality with the almighty power of a mythical god. Villains tend to be serious, sometimes to the point of tedium or predictability. Hades joins baddies like the Joker and Kefka Palazzo as a really bad guy with a really good sense of humor.

To this day, I can hardly believe Disney allowed The Hunchback of Notre Dame to be made. It’s an excellent film, but definitely doesn’t fit Disney’s kid-friendly image. Take Claude Frollo. This judge plans a genocidal crusade to murder the gypsies of Paris: a heartless ethnic cleansing in the name of religion. Judge Frollo clings to hypocritical self-righteousness, yet desperately fears that his lust for a gypsy woman will damn him to an eternity in hell. Yeah. Heavy stuff. Just listen to his villain song, “Hellfire.” Most Disney baddies get a villain song, but Frollo’s is the only one about sexual desire and everlasting damnation. Judge Frollo is a complex, tormented man, and a haunting antagonist for one of Disney’s most daring films.

Not every villain has to be dark and brooding. If you haven’t already seen The Emperor’s New Groove, stop reading this blog post and don’t come back until you have. Yzma is flipping hilarious. This resentful old woman, whom other characters describe as “scary beyond all reason,” swings madly from manic cheerfulness to furious grumpiness. When she finally loses patience with her laid-back, self-centered emperor, she plans his assassination… only for the plan to go awry and the emperor to end up transformed into a llama. Throughout the film, Yzma and her adorkable henchman Kronk try (unsuccessfully) to track down and kill the emperor before he can reclaim his throne. Hilarity ensues, proving that a villain doesn’t have to be scary to be awesome.

I doubt anyone saw this one coming. Atlantis: The Lost Empire was released in the dark age between the Disney Renaissance in the nineties and the so-called Disney Revival of the past six or seven years. Most of Disney’s films from the early aughts have faded from memory. In the case of Atlantis: The Lost Empire, it’s a shame: I consider this steampunk adventure an underappreciated gem. Its villain, Rourke, is the kind of pragmatic, no-nonsense killer I would never have expected from Disney. Rourke, the leader of an expedition to discover Atlantis, reveals himself to be a mercenary—or to use his preferred term, an “adventure capitalist.” He plans to plunder a magical artifact from Atlantis, killing all of its inhabitants in the process. Rourke stands out for his dry sense of humor, absolute self-interest, and complete disregard for human life. Did I mention the scene in which he snaps and tries to murder the protagonist with an axe? Rourke is a fantastic villain, and I think Disney has none better.

Who are your favorite Disney villains? Let us know in the comments!