I mentioned last time that my family has been visiting for a couple of weeks from Uruguay and the Dominican Republic. How did my dad and I spend this rare and wondrous opportunity?

We watched Marvel’s Daredevil on Netflix, of course.

Well, we also traveled and did some other stuff, but Marvel’s Daredevil was definitely high on our priority list. My dad hadn’t seen it. I felt it was my duty as a loving son to sit him down and make him watch all thirteen episodes. It was rewarding for me to revisit Daredevil, and I noticed a few things I had missed the first time.

I know I mentioned this last time, but the fights in Marvel’s Daredevil are terrific. They aren’t the boring, bland, bloodless brawls of Marvel’s other superheroes. People get hurt in Daredevil, including Daredevil.

Superheroes in other stories are usually invincible. Iron Man has his armor. Captain America has his shield. Wolverine’s metal-coated skeleton and miraculous healing powers make him nearly immortal. The Hulk is literally invulnerable. Even Batman shrugs off a broken back in a matter of months because, well, he’s flipping Batman. Except when it’s convenient to the story, superheroes don’t get hurt.

Daredevil gets hurt all the time. He gets tired. He bleeds. He stumbles and faints. He gets cut open and stitched up. Daredevil is extremely tough, but believably so. His fights are tense and exciting because he could die at any moment—all it would take is one bullet, blade, or blunt object. By comparison, the fight scenes in movies like Man of Steel and The Avengers are dull, by-the-numbers affairs that never put the heroes in any real peril.

Primary colors, especially yellow, are all over the place.

I don’t how I missed this last time—my excuse is that I was too absorbed in the show’s plot and characters—but the color palette of Marvel’s Daredevil is dominated by strong primary colors. New York City has a deep bluish tinge at night. Neon lights give scenes a red or yellow cast. Colored windows flood rooms with golden light. The show’s colors are rich and saturated, giving Daredevil an appropriately comic-book aesthetic.

I really dig it. 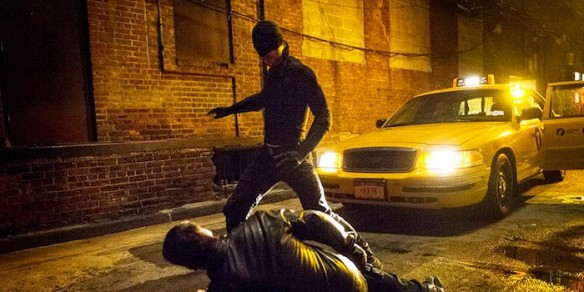 Marvel’s Daredevil is basically a drama with superheroes.

If I had to describe the series, I would call it a crime thriller with some political drama and one or two superheroes thrown in for good measure. It’s a story with superheros, not a superhero story. As in the case of The Dark Knight, the superhero elements feel almost incidental.

The Marvel Cinematic Universe needs to change its approach to storytelling.

The Marvel Cinematic Universe (MCU) is a remarkable achievement: a series of loosely-connected films and television shows that all tell stories within the same fictional universe. The concept is exciting from a narrative standpoint, and has proved profitable for Marvel from a financial one. However, the MCU has been around long enough that it’s starting to stagger under its own weight.

The Avengers: Age of Ultron was a decent movie, which is almost a miracle considering all the ways it connected to past and future films in the MCU. It was forced to continue subplots from The Avengers and Captain America: The Winter Soldier, set up the conflict for Captain America: Civil War, hint at events in Thor: Ragnarok, introduce story elements for the Black Panther movie, and progress the Infinity Stones story arc.

Does that sound confusing and exhausting? It is. The MCU, like so many of the comics that inspired it, is becoming hard to follow.

Marvel’s Daredevil is technically part of the MCU, but it makes only a few passing references to The Avengers and leaves it at that. Daredevil is mostly a self-contained story. It leaves one or two loose ends for future series to tie up, yet remains accessible.

The MCU needs to be less like a complicated serial, and more like an anthology. We don’t need more Iron Man movies. What we need is more stand-alone stories like Daredevil—stories that share a universe without necessarily continuing the same tired plots.

Marvel’s Jessica Jones, a related series, comes out on Netflix in less than a month.

Marvel’s Daredevil is the first of several interconnected series from Netflix based on lesser-known Marvel superheroes. The next, Marvel’s Jessica Jones, comes out next month. I don’t know much about it, but the series will star David Tennant (AKA the Tenth Doctor from Doctor Who) as the villain. Early screenings of Jessica Jones have been positive. If it’s even one-half as good as Daredevil, I’m certain I will enjoy it.

What shows have you been watching lately? Let us know in the comments!