Once upon a time, in the faraway land of Indiana, Adam the blogger enjoyed a number of whimsical stories and contemporary fairy tales. Here are his impressions of three animated films, a video game, and an anime: Inside Out, Brave, Brother Bear, Ni No Kuni, and Monthly Girls’ Nozaki-kun.

These are the stories of a plucky princess, an Inuit tribesman, a brave little boy, a Japanese manga artist, and the personifications of a girl’s emotions. Do they live happily ever after? 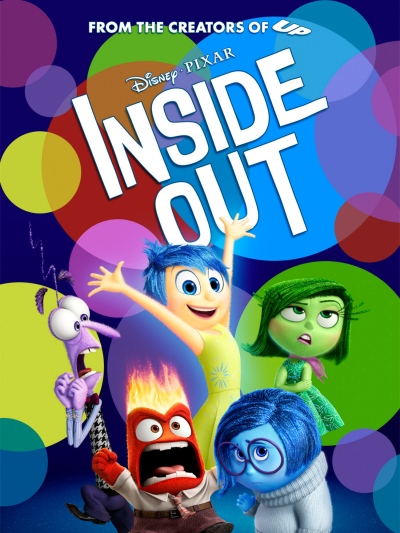 Inside Out brought me closer to weeping openly in a movie theater than any other film has done. (Fortunately, I have a heart of stone, sparing myself and my younger brother the embarrassment of annoying our fellow theatergoers.) This is a brilliant movie, and I have literally nothing bad to say about it.

Pixar’s Inside Out pictures the human mind as a control room operated by five engineers, each representing an emotion: Joy, Sadness, Anger, Fear, and Disgust. In the mind of Riley, a girl from Minnesota, her emotions struggle to keep her happy as she moves with her parents to California. When an accident sends Joy and Sadness to the farthest reaches of Riley’s mind, these unlikely partners must make it back to the control center before Riley breaks down.

This film boasts the usual Pixar polish, with top-notch animation, writing, and performances. Beyond that, Inside Out is the first Pixar movie in years to feature a truly original concept. (Of the past four Pixar films, two were sequels, one was a prequel, and one had the style of a traditional fairy tale—more on that last one in just a bit.) The movie’s concept of the mind is creative, clever, and—importantly—consistent. The way the mind works in Inside Out isn’t hard to understand, and the film does a fine job of sticking to it.

As I hinted above, this is a film with emotional punch. Pixar has a gift for depicting emotion with heartfelt sincerity and simplicity: Carl’s irritable despondency in Up, the toys’ sense of loss in Toy Story 3, Mike’s resignation to his limitations in Monsters University. Inside Out is quite literally a film about emotions, so you can bet it hits the viewer—at any rate, this viewer—with feels.

This is pretty much how I felt at the end of the film.

Inside Out is a fantastic film. Somewhere deep inside my mind, my sense of Joy is fiddling with whatever knobs and buttons affect my actions, willing me to recommend this film. Watch it. Your own sense of Joy will thank you. 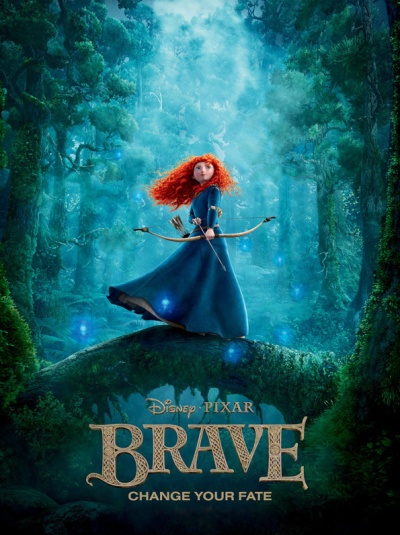 Brave is an original fairy tale. Set in Scotland, it tells the tale of a princess named Merida, who decides she doesn’t want to let her parents marry her off to any of the local chieftains’ sons. Merida tries to change her fate… and accidentally transforms her mother into a bear. Mother and daughter must shelve their pride, settle their differences, and somehow make things right.

The film’s independent, self-reliant heroine is a refreshing change of pace from the mild princesses of other fairy-tale movies, and I appreciate the way the Merida and her mother learn to understand, respect, and trust each other. Merida’s family is a colorful bunch. Even the chieftains and their sons, who could easily have been throwaway characters, have some personality.

As a Pixar movie, Brave doesn’t feel particularly, well, brave. It’s a fairy tale. Even with its feminist undertones and emphasis on family relationships, it treads a lot of familiar ground. It’s a fine film nevertheless, and I appreciate it as a deeper alternative to the princess-flavored romances Disney loves so much.

By the way, does the Scottish setting of Brave give anyone else flashbacks to How to Train Your Dragon? No? I guess it’s just me, then.

Brother Bear is a Disney animated film from the early two thousands: that nebulous stretch of Disney history whose movies nobody remembers. In the film, an Inuit tribesman named Kenai seeks revenge on a bear that killed a loved one, and is turned into a bear for his trouble. He must go on a quest, and learn the power of love, and—y’know, forget it. If you’ve ever seen a Disney film, you know where this is going.

This is not a bad movie. The Canadian wilderness is a great setting, and Inuit culture is largely unexplored in pop fiction. The acting, animation, and story were all perfectly adequate. I just couldn’t help feeling that this film didn’t really need to be made. Brother Bear is an uninspired blend of other Disney movies. Its plot borrows heavily from The Emperor’s New Groove: a man turned into an animal finds a buddy and goes on a trip to regain his (literal and figurative) humanity. The film’s music channels the soundtrack of Tarzan, down to a song from Phil Collins. It’s all been done before.

Brother Bear does have its moments. A couple of moose with heavy Canadian accents wander in and out of the movie, providing comic relief and stealing every scene in which they appear. The movie lacks a traditional villain, which is a refreshing change from Disney’s usual black-and-white morality.

In the end, however, Brother Bear is nothing special. I recommend The Emperor’s New Groove instead: pretty much the same story, but much funnier.

Ni No Kuni: Wrath of the White Witch 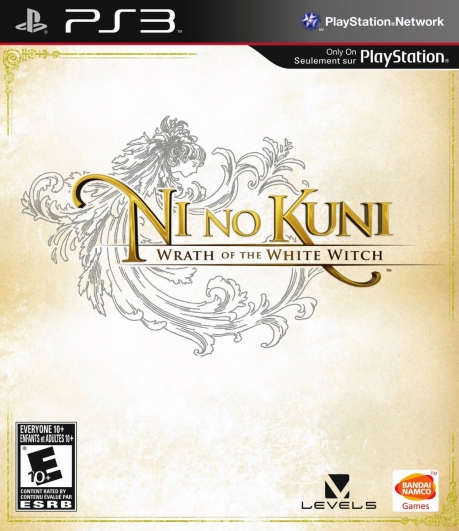 Flipping heck, this game is amazing. I’ve already discussed the excellence of Ni No Kuni, so I’ll try not to ramble!

Ni No Kuni is a beautiful fairy tale. (It also happens to be a JRPG for the PlayStation 3.) It tells the story of Oliver, a little boy who sets out on a quest to save his mum. Accompanied by Drippy, the “Lord High Lord of the Fairies,” Oliver must mend broken hearts, defeat an evil jinn, and rescue a parallel world.

That world is one of the most charming and beautiful places I’ve seen in a video game. The look of Ni No Kuni was based on the work of the legendary Studio Ghibli, which handled the game’s animated cutscenes. This a lovely game. Apart from the cutscenes, which are nothing less than I expected of the Oscar-winning animation studio, the game itself is gorgeous.

This is a gameplay screenshot. This is what the game looks like, more or less. Ain’t it pretty?

Ni No Kuni is visually appealing, but its excellence doesn’t stop there. The music, composed by renowned film composer Joe Hisaishi and performed by a live orchestra, is fantastic. Most importantly, the game is flipping fun to play.

The gameplay blends the fighting and adventuring of Final Fantasy games and the creature-catching of Pokémon. Oliver and his companions command familiars, adorable monsters that handle most of the fighting. Like Pokémon, familiars can be caught, trained, and metamorphosed into stronger creatures. Outside of battle, exploration is fun and sidequests abound.

Ni No Kuni even includes the full text of an original book, The Wizard’s Companion, which contains maps, spells, descriptions of familiars, old-fashioned illustrations, runes to decipher, and fairy tales. Yes, this fairy tale contains fairy tales of its own, and they’re delightful. In fact, The Wizard’s Companion is so good that I wish I owned a hard copy. As Oliver travels, he gathers the book’s scattered pages, unlocking more reading material.

Alas, Ni No Kuni is not quite perfect. It’s hard to read The Wizard’s Companion on a television screen, and flipping through its pages is a pain.

By far the biggest flaw of Ni No Kuni is its ending. Without spoiling anything, I must admit that it feels tacked on. The game reaches a satisfying conclusion, with Oliver reaching his goal and finishing his character arc… and then the game goes on for another four to six hours, limping doggedly to an anticlimax. Although the game’s final chapter answers some lingering questions, a little rewriting would have tied up those loose ends sooner, giving the game a stronger finish.

Despite its weak ending, this game is one of the finest I’ve ever played. RPGs aren’t for everyone, but for anyone with the patience, Ni No Kuni is a gem.

I can’t decide whether Monthly Girls’ Nozaki-kun is a heartwarming parody or a self-aware romantic comedy. Either way, it’s brilliant.

In Japan, there is a genre of manga (comics) called shojo. This genre is aimed at teenage girls, generally focusing on romance and emotional characters. Monthly Girls’ Nozaki-kun is the story of a high school student named Sakura. When she tries to confess romantic feelings for Nozaki, one of her classmates, he mistakes her for a fan of his work. You see, Nozaki—an analytical, unromantic wet blanket—is secretly the writer and artist behind a popular shojo manga series, Let’s Fall in Love. When Nozaki invites Sakura to be his assistant, she agrees, hoping to get closer to him.

This twelve-episode series is a hilarious deconstruction of romantic comedies. The eponymous Nozaki-kun is intrigued by romance, but only from an academic point of view. For example, he loves St. Valentine’s Day, but only because observing romantic couples gives him ideas for his manga series. The thought of actually being romantic never crosses his mind. This makes for some delightful moments when Sakura is convinced he is finally falling in love with her… only to realize he’s testing out ideas for his manga.

For example, Nozaki realizes it’s romantic for a man and woman to share a bicycle, but he doesn’t understand why. He tests the scenario repeatedly with Sakura, eventually acquiring a tandem bike and riding down city streets with Sakura reluctantly in tow. Once he figures out the most romantic method for sharing a bike, he reasons, he can use it in his story for optimal effect.

This is romantic, right? Right?!

As Sakura becomes acquainted with Nozaki and his other assistants, she realizes how much of his manga is based on people she knows. For example, the heroine of Let’s Fall in Love is based on Mikoshiba, a flirtatious male friend of Nozaki’s who is secretly very insecure.

Monthly Girls’ Nozaki-kun deconstructs rom-com clichés, yet the series is never bitter or mean-spirited. I was also pleasantly surprised by the show’s family-friendly tone. Japanese anime is notorious for its inappropriate content. As I began this anime about high school romance, I resigned myself to the saucy innuendos and panty shots that plague other series. Monthly Girls’ Nozaki-kun rises above cheap lewdness, keeping things at a PG level. I found the show’s innocence added to its charm, which is already considerable.

Like many anime, this one offers fascinating glimpses into Japanese culture. I was particularly interested by the creative process of writing and drawing manga, which is gradually shown in the series as Nozaki enlists more assistants.

I highly recommend Monthly Girls’ Nozaki-kun to anyone who likes anime or romantic comedies. I’m not a particular fan of either, yet I really enjoyed it.

What books, films, shows, or video games have you enjoyed lately? Let us know in the comments!