I saw The Lego Movie not long ago. Now, I know other bloggers have already discussed this strange, wonderful, colorful film, but I have a few things of my own to say.

On a Saturday evening weeks ago, I stepped out my front door into chilly gloom, clambered into Tribulation (my rickety car) and sped into the dark, forbidding unknown. Depression, anxiety and vague panic had burdened me all afternoon. It was hard to take those first few steps away from home. I wanted to stay, but I had a mission and dash it all, I was going to complete it.

I was going to see The Lego Movie. 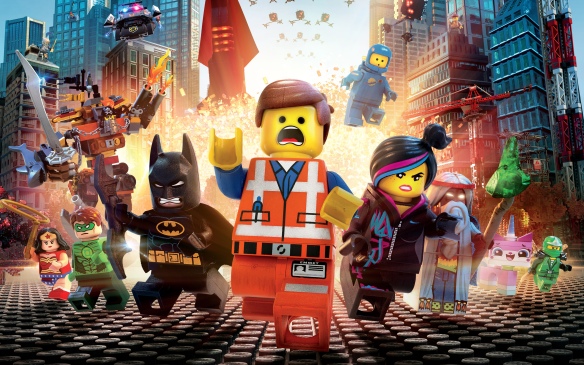 I’m really glad I did.

The film was excellent, but I’m not really going to talk about it. I’ll just point out that it features an upbeat, poppish song titled “Everything Is Awesome,” which pretty much sums up the movie.

The Lego Movie is a bright, cheerful, clever film, and it did me good. Getting out did me good. Defying depression and exploring new places and driving along dark, cold roads in a dilapidated car did me good. These things were different. Some were pleasant. Some were a little scary. For a few hours, I left everything behind.

It helped me see things a little differently.

My life is governed by routines and repetition. Mind, that isn’t a bad thing. Routines are efficient. Doing things differently is challenging, risky and sometimes costly. However, routines have a cost of their own. They lull me into a stupor. Repetition makes me forget there is a wide, wide world beyond my narrow day-to-day experiences.

In a manner of speaking, The Lego Movie is right: everything is awesome. The things repetition make me take for granted are amazing—I just don’t realize it until I leave them behind for a little while.

G.K. Chesterton wrote a story in which a man abandons his children, wife and home and embarks on a long journey. He exclaims, “I won’t stay here any longer. I’ve got another wife and much better children a long way from here. My other wife’s got redder hair than yours, and my other garden’s got a much finer situation; and I’m going off to them.”

The man walks and walks and walks. He walks all the way around the world, and finally comes to his “better” home and “better” family. They are exactly the same ones he left behind… yet they are better. His home and family are better because he has learned to appreciate them. By leaving behind his home and its routines, the man has the exquisite pleasure of coming back to them. He realizes everything is awesome.

Weeks ago, I realized the same.

I guess this means I’ll be going to the cinema sometimes, and varying my route back from work, and ordering more than one kind of sandwich at Subway, and generally finding more excuses to get away. Everything is awesome. Sometimes, I just need to do things a little differently to see it.