For anyone new to Adam’s story, here’s an introduction.

Here’s a look at the five most important characters in my story project, with GLORIOUS CONCEPT ART by the talented Sabina K! (There’s also a bonus picture from JK Riki!) I’ve been excited for this post for a really long time, and today is the day I finally get to share it with you. Here we go!

Lance Santiago Eliot is a college student in the little town of Crossroads, Indiana. His plans to go home for Christmas are rudely interrupted by a journey to a strange new place: the kingdom of Guardia, a land of magic and monsters, teetering on the brink of war. Lance isn’t exactly pleased by this unexpected adventure. He isn’t a hero. He’s a timid guy who hates shaving, plays video games, and loves coffee—a beverage that doesn’t seem to exist in this other universe. The sooner he can go home, the better… but getting home might be harder than he expects.

Fun fact: Lance Eliot is Ecuadorian American, and fluent in both English and Spanish. He uses Spanish mostly for cursing, though.

To all appearances, Eisen is a former military leader living out his retirement in the luxurious heights of Faurum, the Golden City of Guardia. Lance knows better: Eisen is actually the Chairman of the Guardian Peace Committee, a group plotting the overthrow of Guardia’s king. Eisen claims it’s the only way to prevent all-out war, but Lance isn’t convinced. After all, Eisen gave the order that brought Lance to Guardia, so Lance has a hard time trusting him. Eisen prides himself on his neat appearance, dressing in the old-fashioned suits and uniforms of his military days despite the warm climate. Although he smiles constantly, he seems more polite than sincere.

Fun fact: Eisen always wears dark glasses, even indoors. He claims they prevent his chronic headaches. They give him a slightly sinister appearance. 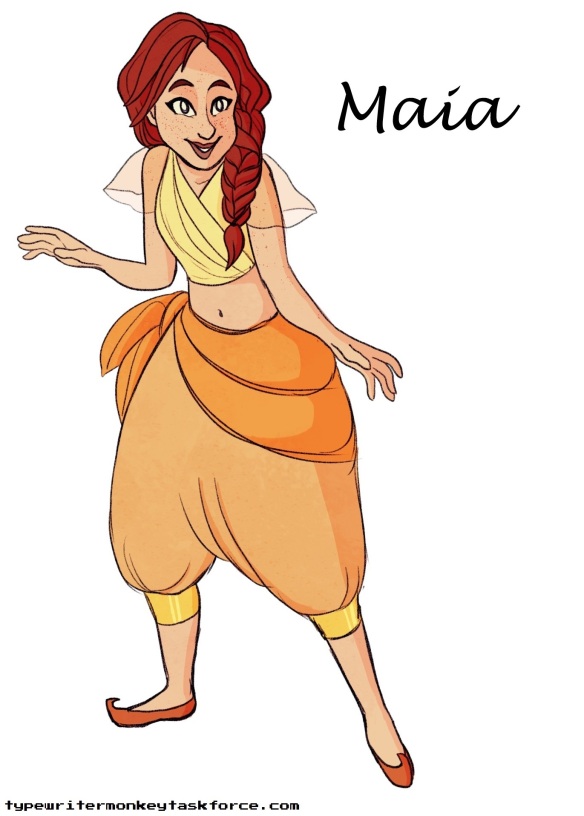 Maia is an aerist: a person born with the ability to channel aer, a cosmic energy Lance defines as “basically magic.” Maia is technically an aerist in training, but she’s getting there, really! She’s already mastered Linguamancy, the discipline of tongues, and she’s working really hard on Vocomancy, the discipline of summoning. I mean, she summoned Lance to Guardia all the way from Crossroads, Indiana! (She was actually under orders to summon Lancelot, the legendary knight of Camelot, but got Lance Eliot instead. Whoops!) Maia is upbeat, friendly, and easily excited, but seems to have a hard time taking anything seriously.

Fun fact: Despite her childlike personality, Maia is exceptionally intelligent and well-read. Her interests range from contemporary fashion to ancient lore and history.

When Lance leaves Faurum, Tsurugi accompanies him as an escort. Lance is both intrigued and irritated by this silent soldier. What mysteries lie behind that blank face and those shifty eyes? Lance’s speculations are soon interrupted by ugly facts: Tsurugi is a war criminal working for Eisen as an alternative to execution. Tsurugi seems tired, even broken, yet hasn’t lost his edge—his military prowess is legendary. Lance suspects there’s more to his story, but Tsurugi isn’t talking.

Fun fact: Tsurugi wears a military uniform with one unusual addition: a red bandana, which he often wears around his face. The bright color is very poor camouflage for a soldier, but Lance knows better than to question it.

Paz is a professional gambler, and she’s eerily good at it. She travels alone, making money in pubs and saloons all over Guardia, and hitting the road before anyone can ask too many questions. When asked why she never seems to lose, she insists she’s “just lucky.” Experience has taught Paz to act tough around strangers. In good company, however, she’s friendly and kindhearted. Paz has mastered many survival skills, including self-defense, but doesn’t have much schooling. After all, if you’re lucky enough to profit from every hand of cards and roll of the dice, do you really need a formal education?

Fun fact: Paz has picked up all kinds of hobbies to keep herself entertained on her solitary travels. In addition to cards for solitaire, she always has a book or two in her pack; when she finishes one book, she trades it for another in the next town she visits. Paz also carves trinkets and figurines out of wood. Since wood is neither expensive nor hard to find, woodcarving is the perfect hobby for a traveler!

Courtesy of JK Riki, here’s a bonus picture of Paz:

That’s all for today! My next post in this series may cover the story’s lore or geography, or maybe some of its less important characters. I’ll work on it.

(Before concluding, I want to thank Sabina and JK once again for their time, patience, and amazing talent. Working with each of you was a pleasure and a privilege. Thank you!)