I could write pages about the silence of God, but it would all boil down to just a few words.

I don’t get it, and it troubles me.

Some of my doubts and questions about the Christian faith have been resolved. Some have not. Why does God let kids get hurt? Why does he allow us to make innocent mistakes? Why does he permit headaches and cockroaches and Fifty Shades of Grey to exist? Why, God? Why?

Yes, I know about sin and death and the fall of humankind. I know, darn it! Those things still don’t explain why God doesn’t, well, explain. Couldn’t he at least make his existence more clearly known? It seems unfair for God to penalize people for failing to believe in him when he seems intangible, invisible and… silent.

I don’t know why God remains silent. In the end, I believe because my evidence for God outweighs my evidence against him. There remain dark doubts and unanswered questions.

Since I don’t have any answers regarding the silence of God, here are what three great novels have to say upon the subject.

Be ye warned: Here there be spoilers for Silence, The Chosen and The Man Who Was Thursday.

The Man Who Was Thursday by G.K. Chesterton 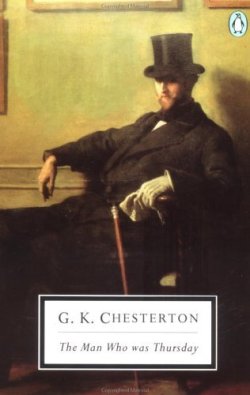 The Man Who Is Thursday is the exciting tale of Gabriel Syme, a poet-turned-detective, and his attempts to stop a band of nihilistic terrorists. There’s a sword duel, and some thrilling chases, and at least one good discussion of poetry.

The novel takes a turn for the surreal in its final chapters, in which Syme and his companions realize their elaborate intrigues against the terrorist organization were actually orchestrated by its leader, the enigmatic man known only as Sunday.

Syme and his friends demand to know why Sunday, who is apparently not an evil man, allowed them to suffer so much pain and fear in their pursuit of him. One of Syme’s companions says, with the simplicity of a child, “I wish I knew why I was hurt so much.”

Sunday does not reply.

The silence is broken by the only sincere member of the nihilist organization, who accuses Syme of apathy and ignorance. It is then Syme realizes that his pain qualifies him to refute all accusations. He and his friends suffered by Sunday’s silence. No matter how wretched or tormented their accuser, the agonies they endured bought them the right to reply, “We also have suffered.”

The Chosen by Chaim Potok 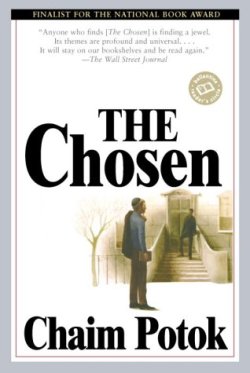 The Chosen tells the story of two young Orthodox Jews in New York during the final years of World War II. During a baseball game, Reuven Malter meets a gifted student named Danny Saunders. They become friends, despite their dissimilar cultures and upbringings within the Orthodox Jewish community.

Reuven is astonished to learn Danny’s father, Reb Saunders, speaks to him only during religious discussions. At other times, Reb Saunders says nothing to his son. This cold silence baffles Danny and Reuven. What kind of father refuses to talk with his children?

The novel follows Danny and Reuven as they grow up and progress in their studies. In the wider world, the horrors of the Holocaust are revealed and Jews fight for the restoration of Israel as a nation. At last, as young men, Danny and Reuven learn the truth behind the silence of Reb Saunders.

Reb Saunders knew his son’s intelligence outweighed his concern for others. In order to teach Danny compassion, Reb Saunders distanced himself from his son. Silence, he hoped, would give Danny an understanding of pain and a greater empathy toward other people.

Danny had learned compassion, and so the silence was broken. Speaking of Reb Saunders, Danny tells Reuben at the end of the novel, “We talk now.” 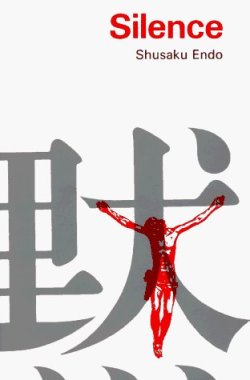 This is it: the definitive novel about the silence of God. Heck, the book is even titled Silence. This gloomy masterpiece tells of Sebastião Rodrigues, a Portuguese Jesuit sent to seventeenth-century Japan. He hopes to encourage the tiny population of Japanese Christians, and is willing to die for his mission.

What he doesn’t expect is to watch others die for his mission. When he is captured by Japanese authorities, Rodrigues is not martyred. Instead, he watches as the authorities martyr other Christians because of his religion. Rodrigues expected to suffer for his faith. He did not imagine he would cause others to suffer for it.

In this darkness and brutality, God says nothing. There is only silence.

At last, as Rodrigues recants his faith to spare the lives of other Christians, the image of Christ he is forced to trample seems to break the silence: “Trample! Trample! I more than anyone know of the pain in your foot. Trample! It was to be trampled on by men that I was born into this world. It was to share men’s pain that I carried my cross.”

For me, this is the most powerful answer in these three novels to the question of God’s silence. God may seem silent, but he has shattered the silence once for all with a single word—rather, a single Word: the Word who became flesh and made his dwelling among us. Whatever the sufferings in this world, Jesus shared them. However little God may seem to say to us now, Jesus said plenty.

Do I understand the silence of God? No. I do, however, find great comfort in these books, which offer tentative answers to a great and terrible question.

This post was originally published on January 3, 2014. TMTF shall return with new posts on Monday, September 5!

2 thoughts on “Three Great Novels About the Silence of God”