Not long ago, I began playing a little game titled Recettear: An Item’s Shop’s Tale, and promptly decided it may be the best thing in the universe.

I exaggerate, but Recettear is delightful all the same. It’s set in a standard fantasy world of monsters, swords, and magic, with one important twist: the player doesn’t control an adventurer. The player controls a shopkeeper: a sweet, chipper girl named Recette who must pay off her absent father’s debts. Recette’s motto: “Capitalism, ho!” 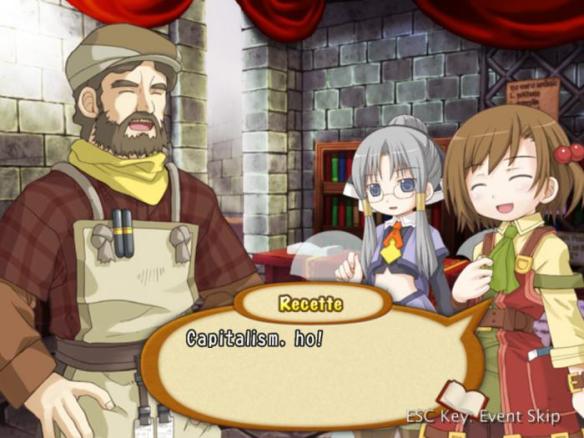 Capitalism has never been cuter.

Fantasy games have always had shops. They’re a ubiquitous feature in the manner of inns, dungeons, and bosses. Gamers accept them without thinking. Heck, off the top of my head, I can’t think of a single fantasy game that doesn’t have some kind of shop.

Recettear turns the cliché of the fantasy-game shop on its head. This time around, the player isn’t fighting to save the world—he’s fighting to make that next debt payment. A player can’t just waltz into dungeons; she must hire an adventurer to keep her safe while she searches for items to sell. Recettear shows the behind-the-scenes struggles of keeping a fantasy-game shop open for business, providing a twist on a well-worn trope.

After a certain number of stories, we begin to see patterns. The good guys win. Things end badly for the villain. Depending on the story’s tone, either romance happens, or it doesn’t—either way, we can usually see it coming. If Sean Bean is in a movie, his character probably dies. We expect these things. We figure out that stories usually work a certain way.

It’s neat, then, when stories come along that work differently.

Consider, for example, how Disney’s Frozen handles the love-at-first-sight cliché. In many previous Disney films, the guy and the girl fall in love hilariously fast. I mean, seriously, the prince in Cinderella decides to marry the eponymous heroine before he even knows her name. They dance for one scene, and then he wants to get married. It’s actually kinda creepy.

Will you marry me? Oh, and what’s your name?

Frozen is different. (Spoilers ahead, in case anyone cares.) The movie sets up the love-at-first-sight cliché between Princess Anna and her crush, Prince Hans. Shortly after meeting, they decided to get married. I mean, they sing a cute song and everything. When they share the news, however, they’re met with incredulity and derision. “You can’t marry a man you just met,” declares Anna’s sister flatly. Later on in the film, Kristoff reacts in pretty much the same way.

When I watched Frozen, I wasn’t expecting the movie—a Disney movie about princesses, mind you—to mock the love-at-first-sight cliché. But it did. And it was refreshing, funny, and simply delightful to see.

Let’s look at a more literary example: Father Brown, the mystery-solving priest from the stories by G.K. Chesterton. Detectives in fiction are often marked by certain characteristics, which are best exemplified in Sherlock Holmes, the most famous detective of all: intelligence, logic, curiosity, emotional distance, and a strong sense of justice.

Father Brown subverts practically all of these. 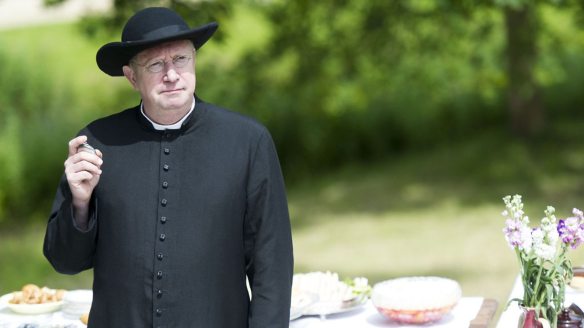 He isn’t your garden-variety sleuth.

He’s a perfect foil to Sherlock Holmes—the Anti-Holmes, if you will. Holmes is tall, thin, emotionless, and just. His brilliance is painfully obvious. By contrast, Father Brown is short, stout, deeply empathetic, and merciful. His intelligence is belied by his humility and simpleminded manner. Holmes solves mysteries by careful reasoning; Father Brown solves them by common sense and an intuitive understanding of human nature. Holmes kills his greatest enemy; Father Brown redeems and befriends his own archnemesis.

Everyone expects Holmes to be brilliant. In a charming subversion, everyone dismisses Father Brown as a superstitious simpleton, which makes it all the more satisfying when he apologetically solves the mystery right under their noses. It’s another terrific subversion of audience expectations, and it makes for great reading.

We’ve all come to expect certain things from fiction. How exciting when fiction gives us things we don’t expect!