Today’s story is a testimony, I suppose, but not mine. It’s the story of a pastor who founded a ministry, and of a congregation that supported it. My part in the story is actually very small. It’s kind of an anti-testimony, really.

Once upon a time, my laziness inspired the creation of a church ministry called Change the World. It gathers donations in the form of spare change and small bills, and then uses this money to support charity projects across the world.

At one point, when I was in college, I acquired about forty-five dollars in loose change. That’s a lot of coins, guys. Seriously, that’s like five flipping pounds of money, stuffed haphazardly into a sagging resealable bag.

Spare change is kind of a nuisance, really.

This little fortune was more of a nuisance than a blessing. Where was I going to spend five pounds of change? I couldn’t use it at a store or restaurant—no sane server or salesclerk would accept a bag of coins. I was too lazy to put them in paper wrappers for deposit at the bank. How was I going to get rid of them?

In the end, I sheepishly handed over the bag of change to my pastor. In my defense, I was transparent about my own laziness. Giving the money to my church was the easiest option; I didn’t pretend otherwise.

My pastor—I’ll call him Socrates—accepted the coins, apparently unfazed by my laziness and ineptitude at being a capable adult. Instead, he realized how much spare change people tend to have scattered around, and decided to redeem it for the kingdom of heaven.

Together with the church’s leadership team, Socrates founded Change the World, which redirects donations of loose change toward a new charitable project every month. A number of church members supported the project enthusiastically. It continues to this day.

In college, I served that church in a number of capacities, from mowing its lawn to running its soundboard to whacking bongo drums during its worship services. I find it hilarious that my only enduring impact on that church was not only completely accidental, but openly lazy.

As Linus from the Peanuts comic once put it, “There’s a lesson to be learned here somewhere, but I don’t know what it is.” 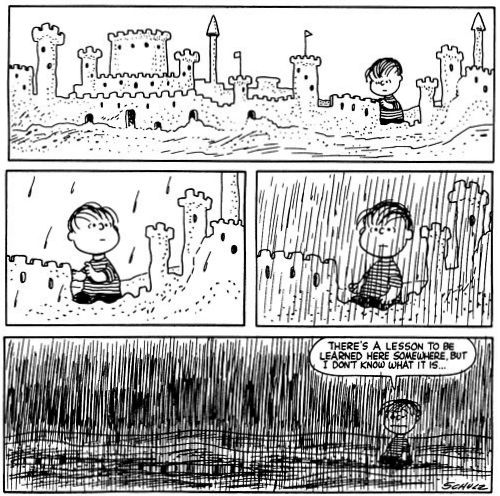 My accidental involvement in the Change the World project reminds me of a story from the book of Numbers. It’s the tale of the wicked prophet Balaam, who was sharply criticized by a donkey. (It’s a funny story.) That donkey probably wasn’t planning to get involved in the work of God, but then neither was I.

My legacy of laziness endures to this day. I hope it has done the world a little good.

Welp, I’m going to take a nap or something.

4 thoughts on “459. That Time I Started a Church Ministry by Accident”