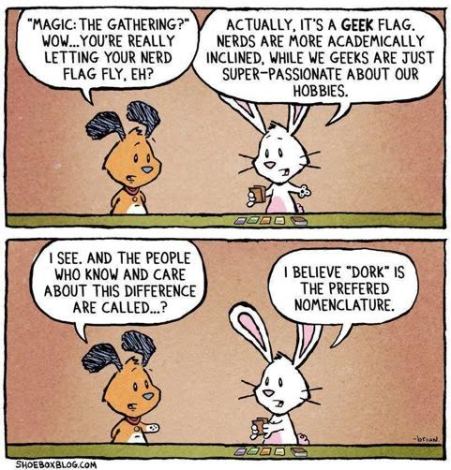 I am not a nerd. (At any rate, I like to think so.) I am, however, a dedicated geek. The difference is neatly explained in the comic above. I knew it already, but then I’m totally a dork, so that’s no surprise.

In another attempt to define the differences between such labels, some well-meaning nerd (or possibly dweeb) made the following diagram:

Although the diagram was (presumably) made as a joke, it offers unexpected insight. Geeks, nerds, and their ilk are fascinating creatures. They are frequently lumped together in the same sociocultural category, but their differences are worth exploring.

By the way, did you notice that in the last panel of the comic above, the word preferred is misspelled? You didn’t? Huh. Maybe I am a nerd after all.

4 thoughts on “Geeks Vs. Nerds: A Dorky Comparison”