A few days ago, as I chatted with a dear friend from Ecuador, our conversation turned to his brave but ill-fated attempts to teach me to play a collectible card game. Years ago in Quito, my friend and I sat down with colorful packs of Magic: The Gathering cards. He wanted to teach me to play; I wanted to learn to play. It seemed simple enough.

However, there were two things neither of us considered. That first is that I am easily distracted. The second is that I have a deplorable memory: especially in the case of rules and systems. As my friend, whom I’ll call Socrates, explained the rules of the game, I flipped through his cards, looking at the pretty pictures and reading incomprehensible bits and pieces of game instructions.

The rules for most collectible card games are only slightly less comprehensible than Finnegans Wake. (I’m sorry; I can’t help making lit jokes occasionally.) The pictures are nice, though!

When Socrates and I tried playing a round of Magic: The Gathering, I asked him an average of thirty-seven questions per turn. We gave up in the end, opting for Mario Kart or Super Smash Bros. or some other game that wasn’t so far beyond my feeble intellect.

For years, I could hardly sit down at a table without having to brush away collectible cards. My friends in middle and high school collected cards from all kinds of games: Magic: The Gathering, which featured fantasy elements in the vein of Dungeons & Dragons; Pokémon, starring Nintendo’s cutesy Pocket Monsters; World of Warcraft, which had leaped from computers to tabletops; and Yu-Gi-Oh!, which featured the most egregious anime hair I have ever seen.

Yu-Gi-Oh my gosh that hair is horrible.

I never got into collectible card games, except for a brief fascination with Pokémon cards as a kid. I went through what I can only call a Pokémon phase in fifth grade, in which I collected dozens and dozens of cards. I never learned the rules of the game, but that didn’t stop me from playing it with friends. Fortunately, my friends were as clueless as I, and our card games turned into anarchic free-for-alls with rules made up as we needed them. (It was sort of like Calvinball.)

I’m not sure what happened to all of my Pokémon cards. They probably slipped away to whatever inscrutable corner of the world swallowed up Amelia Earhart. 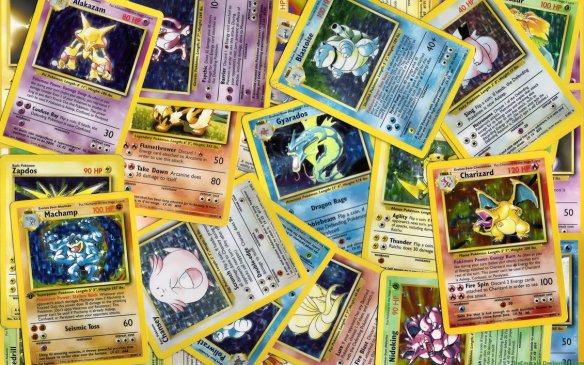 To this day, I have not forgotten the value of a holographic Charizard.

Since I finished high school, collectible cards seem to have vanished from my life, though news occasionally reaches me. I hear there’s a new My Little Pony: Friendship Is Magic collectible card game making the rounds, and Magic: The Gathering seems to be doing well. World of Warcraft cards have been replaced by an online card game. The anime hair in Yu-Gi-Oh! is probably just as bad as it was eight years ago, but I’m too disinterested to find out.

I enjoy looking at them, but I don’t plan to buy collectible cards any time soon. My money must go to necessities like rent, gas, coffee, and food. Besides, my life is complicated enough without the unintelligible rules and instructions for card games! If I tried to learn all the rules to a new game, I would probably lose whatever sanity I have left, and end up eating grass like old Nebuchadnezzar. No card is worth that!

Well… a Charizard might be; I suppose it depends on whether it’s holographic.