In fiction, as in real life, bad things happen. When tragedy strikes, fictional characters sometimes try to drown their grief in alcohol.

We’ve all seen this in the movies. In one scene, a man loses his job or girlfriend; in the next, we find him drinking or drunk. It’s an age-old trope of storytelling. Heck, even I’ve used it. Lance Eliot, the protagonist in my novel, is quite a drinker.

What about stories for children? Here we have a problem. A story may need its characters to drink away their sorrows, but that sure ain’t appropriate for the kiddos! Storytellers, crafty creatures that they are, have discovered a family-friendly alternative to getting drunk on alcohol: getting drunk on nonalcoholic things, of course!

(In writing this blog post, I discovered this trope actually has a name: drunk on milk. Thanks, TV Tropes.)

Here are some examples of characters in family-friendly media drowning their sorrows in things that aren’t alcohol. 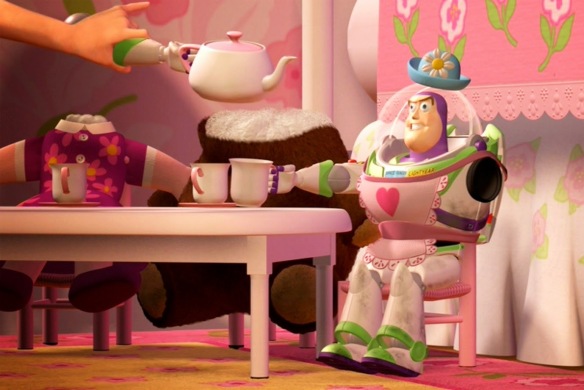 I’ve drunk Darjeeling tea before, and let me tell you: the stuff Buzz Lightyear drinks (or pretends to drink) in Toy Story is like no Darjeeling I’ve ever tasted. Whatever is in those teacups, Buzz gets buzzed. (Pun intended. I’m so, so sorry. By the way, in case one bad pun isn’t enough for you, “Buzz” is pronounced “booze” in a Hispanic accent.) Buzz’s, um, tea is strong enough that he doesn’t seem to mind being called “Mrs. Nesbitt,” which must be humiliating for an intergalactic hero. Darned Darjeeling!

A happy cartoon about magical rainbow ponies can’t show its characters consuming alcohol, despite the fact that one of its protagonists is apparently named after a hard liquor. The alternative? Doughnuts. When Spike the dragon is left behind by his pony pals, he hits the local doughnut shop—the name of which, I can only presume, is Drunk ’n’ Donuts. (Pun intended, but I’m not sorry for this one!) Spike may not get a hangover from his excesses, but I don’t envy him the inevitable sugar crash.

Ramen noodles (The Legend of Korra) 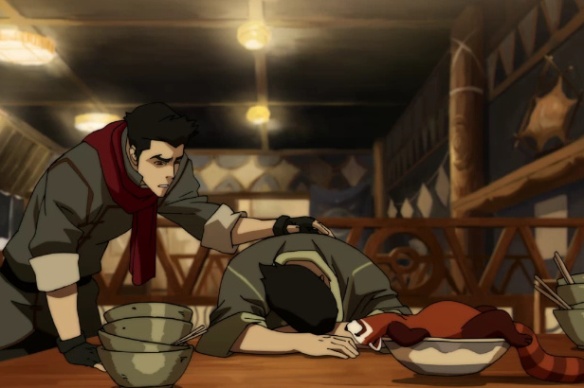 Bolin—the young man passed out on the table in the picture above—deals with romantic rejection as heartbroken men do: by heading to the local ramen joint and eating too many bowls of noodles. This early scene from The Legend of Korra makes me chuckle; I’m especially amused by Bolin’s pet ferret lounging in an empty bowl. The Legend of Korra is a good show… I should catch up with it someday.

The Legend of Zelda: Majora’s Mask is, without question, one of the greatest games I have ever played. It’s also one of the few to feature a milk bar. (Yes, I’ve seen a milk bar in more games than this one!) Open late at night, the milk bar caters exclusively to adults and offers both live entertainment and a variety of dairy drinks. I think the Shakespearean-looking gent in the picture above says it best: “Milk… It’s miiiilk… Can you get tipsy from something like milk?!? Hic!”

I’m digging deep into my childhood memories for this one. At one point, Larry the woebegone cucumber responds to bad news by eating too much ice cream at a diner. (VeggieTales is not just a kids’ show, but a Christian kids’ show, so they really had to keep it family-friendly!) In the picture above, Larry recovers with a warming cup of tea. Let’s hope it’s not Darjeeling.

All right, I’m kinda reaching here, but I suppose this short video counts. Bar Buddies, a brief animation from the brony community, has a kid getting wasted on juice boxes. Apple juice, apple cider, applejack—what’s the difference? They’re all made of apples, right? This one makes me laugh because of the disparity between the well-dressed, hard-drinking guy on the left and the silly kid on the right.

What’s drunk-on-milk scenarios did we miss? Let us know in the comments!

2 thoughts on “348. About Storytelling: Getting Drunk on Milk”