Philosophy is a daunting subject.

Believe me, I know. One of my uncles is a philosophy professor. He has a tremendous beard, an office full of books, and a tendency to use words like epistemology in everyday conversation. I also have a bunch of cousins who studied philosophy. When my relatives on that side of the family gather for a meal or holiday, their conversations can get really academic.

(These relatives also talk a lot about football—I refer to soccer, by the way, not that violent American sport. Their discussions of sports are even harder for me to understand than their talks about philosophy.)

I’ve studied some philosophy, but I’m no expert. Thus I was intrigued when a reader of this blog graciously recommended a video game titled Socrates Jones: Pro Philosopher. As the name suggests, it’s an homage to Phoenix Wright: Ace Attorney. I love the Ace Attorney games, which bring together clever mysteries and bombastic melodrama, and the idea of a game in the same style about philosophy interested me very much.

That said, I must echo Hamlet and ask a big philosophical question: To play or not to play?

Bringing out both the best and worst of Ace Attorney games, Socrates Jones: Pro Philosopher is a cursory yet clever and entertaining exploration of moral philosophy.

Give Me Philosophy or Give Me Death!

Socrates Jones, a simple accountant with an ordinary life, can’t understand his family’s obsession with philosophy. He prefers crunching numbers to arguing about abstract ideas. However, when a car crash lands him and his daughter Ariadne in an afterlife reserved for philosophers, Socrates gets one chance to reclaim their lives. He must debate a series of famous philosophers and resolve one of the Big Questions: What is morality and where does it come from?

I’ll be honest: Socrates Jones is basically a short Ace Attorney game that replaces attorneys with philosophers. Do you know what? That’s a really good thing.

For those unfamiliar with Ace Attorney, I should mention that each game has two main components: crime investigations and legal trials. Socrates Jones borrows the mechanics of the trials and makes a few key changes. Philosophers take the place of attorneys; philosophical theories are submitted instead of witness testimonies; ideas, not physical evidence, are presented as rebuttals. The courtroom structure of Ace Attorney works astonishingly well for philosophy.

Socrates Jones imitates not just the mechanics of Ace Attorney, but also its exaggerated style and sense of humor. Socrates and his opponents are funny, memorable, and well-written. I love how Ace Attorney‘s iconic cries of “OBJECTION!” are replaced in Socrates Jones by indignant exclamations of “NONSENSE!” 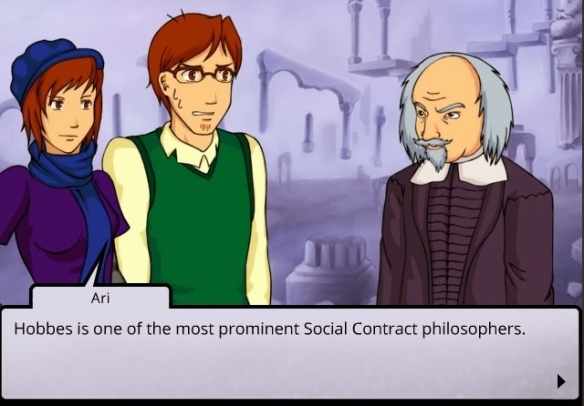 The philosophers themselves are a quirky bunch. When Socrates meets Thomas Hobbes, that famous thinker says gruffly, “You should know, Mr. Jones, that my mother gave birth to twins. Myself, and FEAR. By the end of the day, you will be thoroughly acquainted with both of us.” Immanuel Kant introduces himself in a similarly grandiose manner, only to add that he felt boasting was necessary “to fulfill the prerequisite grandstanding.”

For a game developed by philosophy students and Ace Attorney fans, Socrates Jones is remarkably well-crafted. The game even innovates upon its source material by adding a more robust system for questioning statements. In Ace Attorney, the player can question each statement in a testimony. Socrates Jones takes the system several steps farther by allowing players to ask three questions: Would you clarify your statement? Can you back up this statement? How is this statement related to your argument? By asking the right questions, Socrates trims away the flaws and irrelevancies of his opponents’ arguments.

This game is more than just a game—it’s the Sophie’s World of video games, a set of philosophy lessons wrapped in the appealing package of a good story. Socrates Jones does a pretty good job of setting up the arguments of historical philosophers, and then poking holes in them.

Speaking of poking holes in things….

The Value of the Imperfect

Toward the end of the game, Socrates makes a point that even flawed things can be good. “Things do not have to be ‘perfect’ to add value to the world,” he insists, and he’s absolutely right—fortunately for him. Socrates Jones: Pro Philosopher has two kind of problems. It’s imperfect as a game, and it’s also incomplete as a philosophy lesson.

The game’s faults aren’t severe—in fact, they’re the exact faults of the Ace Attorney series. Deconstructing a statement can be a matter of trial and error; the “right” questions and “correct” rebuttals, as decided by the game’s developers, may be counterintuitive to the player’s way of thinking.

Socrates Jones is a philosophy lesson, not just a game. The game’s arguments aren’t bad, but they have one unavoidable problem: they are scripted. The player is on rails, able to ask only preselected questions and reach predestined conclusions. Socrates Jones excels as brief exploration of moral philosophy, but it’s no substitute for a real discussion.

Socrates Jones: Pro Philosopher is a short, fun foray into moral philosophy. It isn’t perfect as either a game or a philosophy lesson, yet succeeds in being both entertaining and educational.

Anyone interested in philosophy, the Ace Attorney series, or an enjoyable exercise in critical thinking should take two or three hours to play through the game. After all, Socrates Jones and his daughter are philosophizing for their lives, and they could use a little help!

Thanks for reading! If you have a moment, please check out TMTF’s charity fundraisers this month and make this Christmas awesome for a person in need!