When I shared on Monday about my struggles to cope with depression, I promised today’s post would be less gloomy. Not only shall my reflections today be more cheerful, but they’ll also feature pictures of cute monkeys!

(Don’t be surprised. This blog is called Typewriter Monkey Task Force, after all. The pictures belong to my dad, who graciously dug them out of his archive at my request.)

Here’s an old African parable. There were once two monkeys; I’ll name them Apollo and Socrates after two of my typewriter monkeys.

Apollo and Socrates frolicked across the savanna one day, tossing around a coconut and being adorable. Neither monkey realized they were playing near a foul swamp. (As I know from long experience, monkeys aren’t very bright.) Apollo and Socrates tossed their coconut back and forth until Socrates missed a catch. The coconut landed in sticky mud far from the bank.

As the monkeys sat on the bank, staring forlornly at the coconut, Apollo nudged Socrates as if to say, “You go first.”

Socrates stepped into the swamp and trudged toward the coconut, holding up his tail to keep it from trailing through the stinking mud. At last he picked it up, tried plodding back to the safety of the bank, and realized he was stuck. The clinging muck held him fast by the ankles… and slowly pulled him downward.

Socrates let go of his tail, dropped the coconut, and tried pulling a foot out of the mud. It didn’t even budge. He tried the other foot. It was hopeless. The little monkey was trapped, and the mire sucked him steadily down, down, down into the gloom.

Apollo began running back and forth on the bank, waving his little arms helplessly. There were no branches, no vines, nothing that could be used as a bridge or lifeline. If only there were something to which Socrates could hold—something to keep him from sinking.

Then Apollo had an idea. He chattered at Socrates (now waist-deep) to get his attention, and then tugged on his own whiskers. Of course! Socrates didn’t need a lifeline. He could pull himself out of the swamp by his whiskers! The solution to his problem was literally right under his nose. 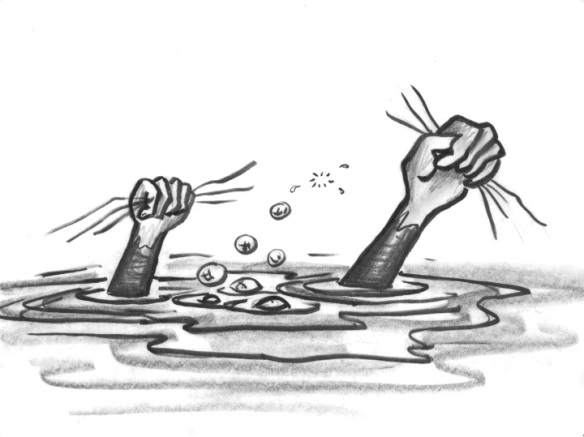 The last Apollo ever saw of Socrates was a pair of paws, twitching faintly and grasping handfuls of monkey whiskers.

Wait. That wasn’t a happy story, was it? Dash it, this is embarrassing. I promised my readers today’s post would be more hopeful. Well, it’s not too late to make a few changes to this parable. Let’s give it a happier ending! 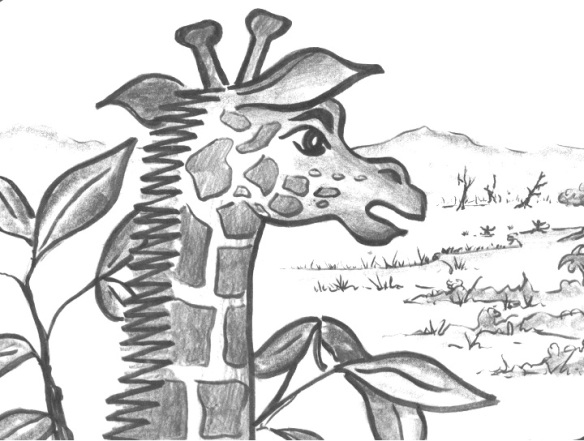 As Socrates yanked vainly on his whiskers, a nearby giraffe glanced over and saw the little monkey struggling in the swamp. Art Garfunkel Giraffe was this noble creature’s name. (Art’s parents were huge fans of folk rock.) He galloped away to find his friend Ringo Starr Elephant. (Ringo’s parents were more into classic rock and roll.) Art and Ringo reached the swamp just as Socrates’ head was about to slip beneath the mud.

Socrates was saved! The animals, who never went near a swamp again, all went out for coffee and lived happily ever after.

There. Was that better?

On Monday, I mentioned that I hate my inability to cope with depression. I also pointed out that many of us struggle to win our private battles. Why have I shared a parable about monkey whiskers?

Some problems have no easy fixes.

As much as I want to find the perfect strategy for coping with depression and anxiety, it may not exist. There may be no easy fix for these problems. My best intentions may be no more useful than a monkey trying to lift himself up by his own whiskers.

Oddly enough, this comforts me. I tend to blame myself for every failure to cope with my depression. The parable of the monkey’s whiskers suggests the possibility that I may not always be able to rescue myself. Some battles may be beyond my power to win… and that means I can stop blaming myself for losing. I can feel depressed without feeling guilty.

If depression is a problem my best intentions can’t fix, should I just give up?

We can’t rescue ourselves—but others can help.

Depression is a private battle. All the things I mentioned on Monday—addiction, self-loathing, broken relationships, self-destructive impulses, and so on—are things we hide. They’re private. They’re shameful. They’re embarrassing. They’re also things we don’t have to face alone.

In fact, facing them alone may be as stupid as a monkey trying to haul himself out of a swamp by his whiskers.

We all need help from others. Some of us could benefit from professional counseling, antidepressants, or therapy. Some of us need hugs. We feel better for talking or going for walks or playing Mario Kart with loved ones. It’s amazing to share a private battle with someone and hear them say “I love you” or “I’m praying for you” or even “That really sucks; I hope things get better.”

In my struggles, few things have brought me greater hope or healing than people listening to me, praying for me, encouraging me, or simply acknowledging that they know I’m struggling. Maybe that’s what the Apostle Paul, bless him, meant when he wrote, “Carry each other’s burdens, and in this way you will fulfill the law of Christ.”

We can look to others for help, and we can always look to God. As it is written, “Cast all your anxiety on him because he cares for you.” He listens when no one else will.

We all have our battles to fight. What we must always know is that we never have to face them alone.