High school was a strange chapter of my life. I moved repeatedly, attended schools on separate continents, became a writer, discovered my love of coffee and broke down on the Ecuadorian coast in the rain at night in an area infested with bandits. Good times, good times.

Some of my best high school memories come from the Alliance Academy International in Quito, the capital of Ecuador. The school offered an excellent education, and its faculty consisted largely of lunatics. It was at this school that I became the father of a small, rotund, green-skinned child. His mother and I named him Hakkatan Melchizedek Stück. 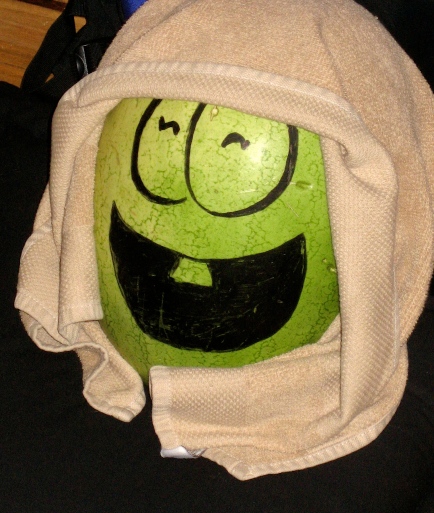 He had his father’s, um… dish towel.

My egg-shaped offspring was the result of a project in my senior year in which students were put in pairs, given watermelons and required to spend a week nurturing them as loving parents. This was meant to teach us all about parenting. I’m not sure exactly how that was supposed to work, except that babies and watermelons are both kind of heavy and don’t respond well to being dropped.

My wife for the project, whom I’ll call Socrates, wanted to name our child Hakkatan. I wanted to name him Melchizedek. In the end, in the spirit of matrimonial harmony, we compromised and gave him both names. Our classmates gave their children boring names, except for one young gentleman who called his melon Triton Quincy McFarland.

Hakkatan was a quiet, cheerful child. He never cried, always grinned and gave his parents hardly any trouble.

Of course, the same wasn’t true of all my classmates’ kids. At least one watermelon met a grim end when his parents abandoned him in a dorm room for several hours. According to the story I heard, they returned to find half the melon smashed on the floor, the other half stuck full of knives and a note that read NEVER LEAVE YOUR CHILD ALONE.

Some of my classmates really got into parenting their melons, dressing them up in baby clothes and wheeling them everywhere in strollers. I don’t recall how Socrates and I handled Hakkatan; we may have carried him around in a basket, but I don’t really remember. There is one thing I remember clearly: how Hakkatan met his end.

You see, the parenting project lasted only a week. Hakkatan was my child for seven days. After that, he was merely a watermelon. Some of my classmates celebrated the end of the project by eating their melons. That seemed a bit morbid, so I settled for chopping up Hakkatan with a machete and disposing of his body in a trash bag.

Socrates and I each received a good grade for the project, after which we dissolved our week-long marriage. She and I remained on good terms until our graduation from the Alliance Academy International; I haven’t seen her since. As for Hakkatan, well, his rounded figure and beaming face nearly faded from my memory. It was only as I browsed old photos recently that I stumbled upon the picture above: my child, smiling at me from across the years, neither bitter nor resentful at his violent demise.

Requiescat in pace, my son. Flights of angels sing thee to thy rest!