I seldom care for spy fiction, war stories or anything involving guns. Tales of modern warfare are uncomfortably familiar in this tragic age of child soldiers and terrorist attacks. Fantasies interest me more than thrillers, especially in video games. I prefer swords over grenades and AK-47s.

Every now and then, however, there comes a war story so fascinating that I can’t help but be interested. Metal Gear Solid is such a story.

It stars this guy. 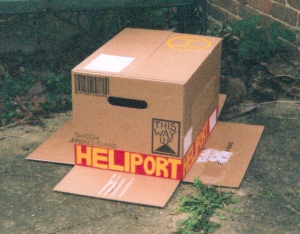 This may not be the most flattering picture of our hero. Sorry. Let me try again. Metal Gear Solid stars this guy. 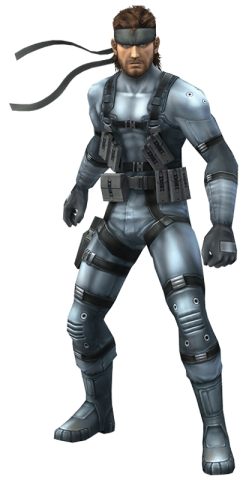 Solid Snake is a retired operative with a cigarette addiction, a penchant for hiding in cardboard boxes and a gift for sneaking around unseen. His retirement comes to an abrupt end when the US government forcibly recruits him for a top-secret mission on Shadow Moses Island, a nuclear weapons disposal facility in Alaska’s Fox Archipelago. Terrorists have seized the facility. Oh, and did I mention Metal Gear—the colossal armored vehicle armed with nuclear warheads? Snake must rescue two hostages and prevent a nuclear strike… and get out alive, if possible.

I played the Nintendo GameCube version of the game, Metal Gear Solid: Twin Snakes. (The original game was released for the PlayStation.) My version apparently features better graphics and a few gameplay tweaks, but remains pretty much the same game.

I had a sneaking suspicion I’d like this game, so I decided to give it a try. Is Snake’s mission worth it, or should players keep off Shadow Moses Island? 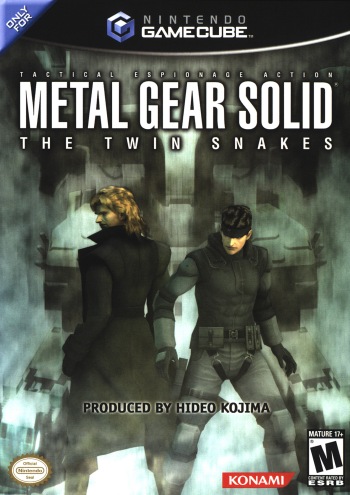 For players with a lot of patience, Metal Gear Solid is an absolute gem. Players wanting a fast-paced, action-packed game should look elsewhere. This is not a game for people with short attention spans.

In the first place, Snake does a lot of sneaking. There are firearms in this game—heck, there are even grenades and rockets—but the player who runs around with guns blazing will die very quickly. Metal Gear Solid does not reward brute force. It requires finesse, perseverance and a willingness to hide in ventilation shafts until enemy soldiers give up looking and go away.

Fortunately, Snake has a lot of tools at his disposal. Some of these are what you’d expect from a spy thriller: a silenced pistol, for example, and a sniper rifle. However, some of his gear is a little less… conventional. Snake uses cigarette smoke to detect security lasers. A well-placed magazine distracts hostile guards long enough for him to sneak past them, and let’s not forget his ever-useful cardboard boxes!

Getting past a room full of watchful guards and security cameras is difficult, even with Snake’s arsenal of handy tools. Players will die a lot. All the same, Metal Gear Solid is a fair game. Progressing takes trial and error, but there’s great satisfaction in figuring out a safe route or foolproof strategy.

Snake has some additional help from teammates via his Codec, a covert communications system. Colonel Campbell, Snake’s commanding officer, gives useful directions and tactical advice. Mei Ling, a data analyst, saves Snake’s progress. (She also shares Chinese proverbs and quotations from Western literature.) Other characters offer sundry kinds of advice. When the player gets stuck—and sooner or later, he will get stuck—he can turn to his teammates for help.

These Codec conversations are not just useful, but amusing and interesting. The player gets to know several engaging characters by chatting with them over the Codec.

The game’s story is a weird and wonderful mix of gritty realism and superhero absurdity. Metal Gear Solid is like a cross between a Batman comic and a novel by Tom Clancy. The plot involves genetics, military history and international politics; the story is often believable and remarkably smart. On the other hand, Metal Gear Solid also includes a giant robot, a cyborg ninja and a band of villains with names like Revolver Ocelot and Psycho Mantis.

Speaking of Mr. Mantis, I must mention the game’s tendency to break the fourth wall in really clever ways. Psycho Mantis, a psychic, reads Snake’s mind—and then seems to read the player’s. “You seem to like The Legend of Zelda, don’t you?” he asked me when I played. (The game read the data on my GameCube’s memory card. All the same, it was impressive—and a bit freaky—to hear this fact from a “psychic” villain.) Psycho Mantis also instructs the player to put her controller on a flat surface so that he can demonstrate his “psychokinetic power,” and then causes the controller to move. (The GameCube controller has a built-in vibrator, but still!)

The game is actually a bit too clever for its own good. The fight with Mantis is unbeatable without using an odd trick, and a Codec frequency earlier in the game is inaccessible to players who don’t have the game’s original packaging. (I suppose this is why we have the Internet.)

Although players are encouraged to sneak instead of shooting, Metal Gear Solid is a violent game. People die. There is blood. The bad guys have no aversion to wanton slaughter. One villain specializes in torture. Other negative elements include Snake smoking like a coal train, a cowardly hostage wetting himself and one busty female character braving the frigid Alaskan weather in a skimpy jacket. This is a great game, but not one for kids.

Metal Gear Solid has its rough edges. The game has a steep difficulty curve. Cutscenes are ridiculously long. Voice acting is decent, except for one or two characters whose accents are laughably bad. There’s some tedious, Metroid-style backtracking through familiar areas. Finally, as I pointed out, the game requires a good deal of patience. There’s no rushing through this one.

On the whole, Metal Gear Solid is a fine game. Snake and his boxes will always be welcome in my home, so long as he doesn’t smoke any of those filthy cigs.