I like making top ten lists. (You may have noticed.) For whatever reason, I enjoy organizing the best (or worst) things together in groups.

I once made a list of my top ten favorite books. The Bible was there, of course, along with classics like The Lord of the Rings and The Innocence of Father Brown (because J.R.R. Tolkien and G.K. Chesterton are awesome). In fact, there was only one surprise: a very short, very impromptu series of autobiographical sketches by a nurse who called herself Tribulation Periwinkle. 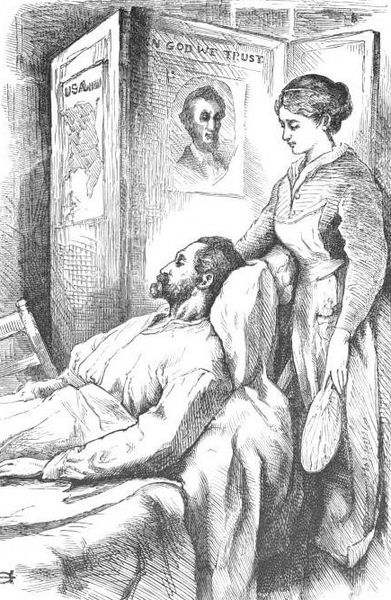 Tribulation Periwinkle may be the best name ever.

Tribulation Periwinkle was really Louisa May Alcott, who is best known for her novel Little Women. When the American Civil War broke out, she enlisted to care for wounded soldiers in Washington D.C. as a volunteer nurse: an experience she described in a cheerful little book titled Hospital Sketches.

War is horrible. I’ve never been in a battle, but I’ve seen and read and heard enough to understand that armed conflicts are unspeakably dreadful things. General Sherman, who fought in the American Civil War, famously declared, “I tell you, war is hell!”

Written from such tragic circumstances, Hospital Sketches is unexpectedly hilarious. It may not be very accessible for modern readers—the book is crammed with old-fashioned words, archaic idioms and references to classical literature—but I find it hysterically funny.

What really impresses me is how Alcott found humor in the bleakest situations. When confronted with an unappetizing meal, she cheerfully compared the bread to sawdust and observed how much the stewed blackberries looked like preserved cockroaches. Listening to her injured patients snore late at night, she declared them a “band of wind instruments” and restrained herself from breaking out in John Brown’s favorite hymn: “Blow ye the trumpet, blow!”

This incredible optimism and humor in the face of difficulty reminds me of something G.K. Chesterton once wrote: “Always be comic in a tragedy. What the deuce else can you do?”

It also reminds me of a certain pink pony.

Pinkie Pie is a character from a popular cartoon called My Little Pony: Friendship Is Magic, of which I am a fan. She breaks the fourth wall, blurts out non sequiturs and generally does things that make me laugh.

Pinkie also finds humor in miserable circumstances. Surrounded by horrific demon trees? She giggles at their twisted expressions and makes faces at them. Trapped in a surreal nightmare by an ancient spirit of discord? She points out the advantages: “Eternal chaos comes with chocolate rain, you guys! Chocolate rain!”

I’m a pessimist. A pessimist is not a fun thing to be. Louisa May Alcott and Pinkie Pie seem to have discovered a brighter outlook: finding glimmers of hope and humor in dark times.

Perhaps I should try to be positive, even when my circumstances are not.