The Internet is not a friendly place.

Penny Arcade, a popular webcomic, proposed the following theory: Normal Person + Anonymity + Audience = Total Jerk. (The original theory used a stronger word than Jerk, but I altered it because my mother reads this blog.) Secure in their anonymity, quite a number of ordinary people become insufferable gits on the Internet.

This high population of total jerks defaces the Internet with hatred, strife and bad grammar. Vicious arguments, packed with swearwords and poor spelling, are everywhere.

The Internet has issues, to put it politely. You can hardly swing a USB cable without hitting a hacker, a stalker or a Twilight fanatic. The infamous law known as Rule 34 makes the following proposition: If a thing exists, there is a pornographic depiction of it on the Internet.

Then there are the trolls. 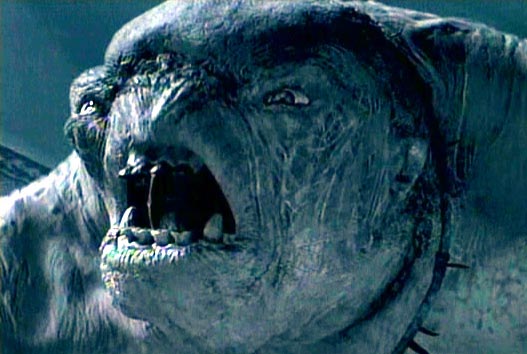 This troll and the monster in Jabba the Hutt’s basement must be distant cousins or something.

I’m not talking about the monsters who live under bridges and wander into the bathrooms at Hogwarts. No, I’m talking about a different kind of monster: people who amuse themselves by making deliberately offensive or provocative statements.

Trolling can be in good fun, but it can also be horribly cruel. In an article I once read, an anonymous troll admitted to leaving a mocking comment on the Facebook profile of a girl who had recently committed suicide.

Yes, the Internet can be an awful place.

Let’s make it a better one.

You see, March 4 is Be Nice to Someone on the Internet Day. Think of the holiday as a celebration of kindness. If that’s too sappy for you, think of it as a defiant, quixotic stand against the senseless cruelties running rampant across the Internet.

The milk of human kindness hasn’t soured and turned to yogurt quite yet, and on March 4 we’re going to prove it.

On Monday, March 4, go to someone’s Facebook profile, blog page, YouTube channel, deviantART page, Twitter profile or Tumblr account and leave a sincere, encouraging comment. Find someone whom you appreciate—whether an artist, a musician, a blogger, a friend or a total stranger—and let that person know he or she is appreciated.

Years ago, my life was brightened by a slip of paper: a random note of appreciation. It must have taken five minutes to write. I kept it for years. A sincere, thoughtful word of encouragement can brighten someone’s day. It can even change someone’s life.

If you feel inspired, take a minute sometime before March 4 to spread the word about Be Nice to Someone on the Internet Day. You’re welcome to share this blog post, and you’re also welcome not to share it. Just tell people to go be nice to someone on the Internet. Write your own blog post. In your own creative, unique, wonderful way, do something to make the Internet a better, nicer, kinder place.

1 thought on “163. Jerks, Trolls and Other Hazards of the Internet”