I’ve been watching Doctor Who. Besides kindling a strong desire in my heart to own a fez, the show has reminded me of my very favorite character archetype: a rare, strange and wonderful kind of character, comic and tragic, plain and mysterious—the Wanderer-Hero.

(I should wear a fez. Fezzes are cool.)

The Wanderer-Hero is my favorite kind of character in fiction, and a very rare one. I can think of only four characters that fit the description perfectly: the Doctor from Doctor Who, Gandalf from The Lord of the Rings, Vash the Stampede from Trigun and Father Brown from the stories by G.K. Chesterton. 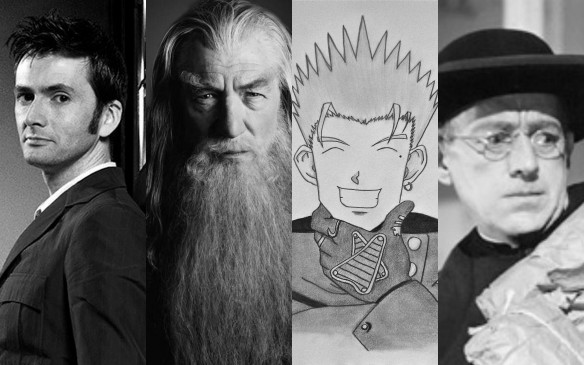 These four—a time-traveling alien, a wizard, a gunslinger and a priest—have hardly anything in common, or so it seems at first glance. They actually share quite a number of traits, all of which characterize the archetype of the Wanderer-Hero.

For fun, let’s take a look at just a few.

There is no home for the Wanderer-Hero, whose destiny is to roam.

The Doctor travels in time and space with no home but his TARDIS, a spaceship and time machine. Gandalf wanders across Middle Earth. Vash roams the deserts of Gunsmoke. Even Father Brown, who supposedly lives in Essex and later in London, spends a surprising amount of time rambling throughout England, stumbling onto crime scenes wherever he goes.

Outwardly, the Wanderer-Hero is cheerful, witty or clever.

When confronted with deadly peril, the Doctor’s first reaction is to make a joke. Gandalf has a wry sense of humor. Vash makes a fool of himself at every opportunity; for example, while bravely defending a town from bandits, he wears a trash can lid for a hat. Father Brown possesses a gentle wit and a comically unorthodox manner of solving mysteries.

The Doctor suffers from deep loneliness, guilt and self-doubt, besides the sorrow of being the only surviving member of his race. Gandalf fights a long, lonely, thankless battle against a nearly invincible enemy. Wherever Vash goes, innocent people die; these tragedies tear him apart. Father Brown admits to solving crimes by possessing a profound, painful understanding of human wickedness.

The Wanderer-Hero is more than human

In some way, the Wanderer-Hero is superhuman.

The Doctor is a Time Lord, the last survivor of an ancient race of extraterrestrials. Gandalf is one of the Maiar: divine beings sent into Middle Earth in the guise of mortals. Vash is a Plant, a humanoid creature possessing incredible power. Father Brown is only a human being, but his gentleness, wisdom and compassion are almost angelic.

The courage of the Wanderer-Hero is balanced by the wisdom of age.

The Doctor is roughly nine hundred and nine years old. Gandalf spends centuries wandering Middle Earth. Vash is one hundred thirty-one. Father Brown is the only one whose age isn’t numbered in the hundreds, and even he gives the impression of being an ancient saint.

The character is called the Wanderer-Hero, after all.

Quite by accident, the Doctor always finds himself in exactly the right time and place to avert a catastrophe. Gandalf regularly appears just in time to rescue his companions. Vash helps people wherever he goes. By solving every crime he encounters, Father Brown saves the day—and sometimes the criminal.

I suppose the reason I like the Wanderer-Hero so much is that the character is a paradox: funny and sad, silly and wise, plain and mysterious, ordinary and extraordinary. The Wanderer-Hero has a little bit of everything.

Who is your favorite Wanderer-Hero? Should I acquire a fez? Let us know in the comments!